At the cutting edge of fabulous fashion: the secrets of vintage dress restoration… 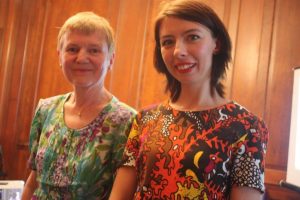 At the cutting edge of fabulous fashion: the secrets of vintage dress restoration unzipped by London couturiere Mirjam Maramaa,  By James Brewer

Vintage clothing is a billowing business of impossibly wasp-like waists and of multi-billion dollar turnover. Whether wealthy or of modest means, the women who wear vintage pieces dress to impress rather than invest.

Such is the weft and warp of this unique industry, vintage apparel expert Mirjam Maramaa told a select audience in the intimate setting of the drawing room of the Estonian Embassy at Hyde Park Gate.

She revealed to members and guests of the British Estonian Association selected secrets of her trade: how her needlework ensures that clients’ dresses look like old – and new – as they tread the red carpet and or make a grand entrance at private parties. 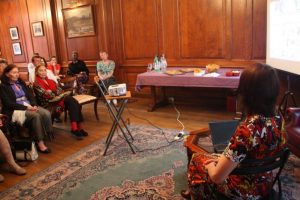 Mirjam (pronounced like the English version of the name, Miriam) is the envy of many fashion aficionados as she handles gorgeous materials every day, although for her this is work not play.

Born and educated in Estonia, she pursued her creative studies in London to become a sought-after vintage haute couture restorer, seamstress and designer. Vintage wove itself into her every waking moment when she got to know and collaborate with a leading London dealer.

To gasps of admiration from her listeners, Mirjam showed a succession of photos of dresses dating from the 1920s to the 1970s (the broadly accepted span for the term ’vintage clothing’) on which she had advised and worked. It seemed little wonder that some people categorise such garments as ‘wearable art.’ 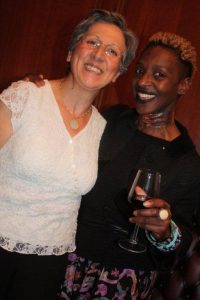 Firing numerous questions, everyone marvelled at the dresses which would be confined to museum cases but for skilful tailoring by Mirjam, who has repaired and fitted headline-grabbing outfits for stars gracing such jamborees as New York’s Met Gala – for which tickets cost up to $25, 000 – and the Bafta Awards.

Mirjam said: “I have been very lucky to be able to work in my subject, which is vintage fashion and vintage haute couture dresses.”

Financial information in the trade is cloaked in secrecy, partly because many of the robes change hands in private sales, but prices at auction have been soaring. In one sale for which details were released,  the Vintage Couture auction in November 2012 at Christie’s South Kensington, £567, 200 ($907, 520) was realised, with the most conspicuous lot an Elsa Schiaparelli black velvet evening jacket of 1938  which went for £73, 250.

The dresses that are referred to Mirjam for alteration are all unique. Some have been worn by famous people and that is known, sometimes she is unaware of the wearer provenance. 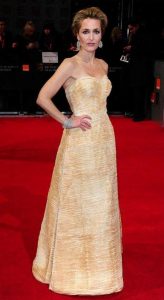 Gillian Anderson wearing a Sybil Connolly dress at the Baftas 2012.

Another showpiece item was a 1930 creation of Cristóbal Balenciaga labelled Eisa (the name of his mother and of his first shop), with an extremely small waist of 48 cm, necessitating a special corset underneath. Among other touches, Mirjam had refurbished the buttonholes by hand.

A dress by Christian Dior from 1954 was next on the screen, followed by a 1960 specimen with the seams reworked by hand.

Mirjam’s log continued with a design by Hubert de Givenchy, and a black velvet opera coat with white mink fur collar and white silk satin lining from the 1920s – “I really want it, but I can’t afford it!”

A summer dress came up – “this is so beautiful, I want to share the beauty with you, ” she told the audience. With the waist so small, the zip had burst and had to be sewed back on. 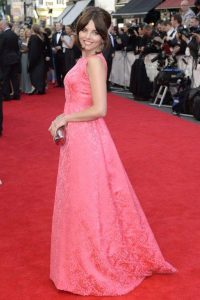 Ophelia Lovibond wearing a 1964 Tassel dress at the 2014 Baftas.

Next was a haute couture autumn-winter 1937-38 Schiaparelli jacket in black velvet with pink glass grape buttons: “next week you can buy it at auction at an estimated price of £20, 000 – absolutely beautiful.”

In mint condition and valued at £15, 000, was a remarkably pleated, ‘springy’ dress produced about 90 years ago by the Italian designer Mariano Fortuny. It is seemingly seamless, so it fits every size and “takes the shape of every woman’s body, ” said Mirjam. “There is one seam – you cannot see it because it is all pleated.” A lady in the audience exclaimed: “It would not fit my waist, ” but Mirjam replied: “it would, because it is flat.” Another of those present agreed: “The family can wear this one.”

Mirjam showed a suit “which just melts into a woman’s body” thanks to its built-in corsets.

Often Mirjam’s commissions are rush jobs. With a party coming up, a client will demand: “I have to have this dress for tomorrowevening.” In many instances the customers do not buy the dress, they simply wear it as a promotion for a company.

How are the garments chosen? “They try on many different dresses.” After that, “sometimes there is a lot of work, sometimes just the hems. Every dress is different.”

Whatever they choose, the celebrities aim to look like a million dollars and more. Those who have worn attire attended to by Mirjam include Gillian Anderson, Laura Carmichael, Lily Allen, Nigella Lawson, Tilda Swinton, Ophelia Lovibond, Emilia Fox and Anna Friel (the last named with a 1950s dress altered by Mirjam).

Asked at the talk about her technique, Mirjam replied: “It is very difficult to describe, you have to see it.” One of the biggest problems is finding a match for missing buttons: “If one is missing, you have to replace all of them.” 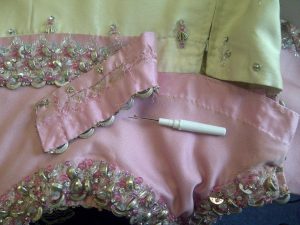 Working on a Rahvis couture dress.

For the event, Mirjam, who is a great fan of the enlivening colour red, wore one of her own stunning designs, from a 1970s-cotton mix fabric, with a bright, eye-catching pattern.

Does her native Estonia share the craze for vintage? Interest in the Baltic state is mainly for 1960s and 1970s pieces as “we do not have the glamour heritage, ” but things may change if people come across older items that were long ago stored away in drawers.

How about accidents at the sewing bench? “Once I burned the neckline of a dress, so I made it a bit lower and fortunately nobody noticed.” 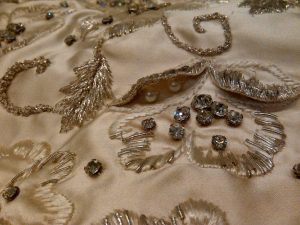 A detail of the Lesage beading from a Pierre Balmain haute couture 1954 gown.

Mirjam is self-taught from “my own experience and work I have done over so many years. Whether it is for a celebrity or for someone with a £100 dress, my work is the same, ” she said.

Social historians have a theory about the appeal then, and now, of such distinctive apparel. New styles in the 1920s and 1930s coincided with an era of perceived increased freedom for women, while today wearing sharply tailored items is a badge of individuality in contrast to the blandness of modern mass fashion. 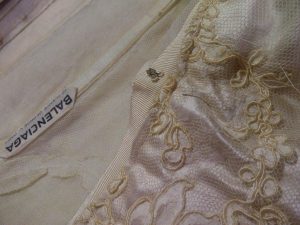 Mirjam was introduced by Tina Tamman, editor of Lennuk, the twice-yearly journal of the British-Estonian Association. In current Estonian,  lennuk means aeroplane, but it was the name of the magic ship which took the hero of the saga Kalevipoeg to the end of the world, and the name given in 1919 to an Estonian naval destroyer in the fight for national independence.

Dennis Hopper: The Lost Album – at the Royal Academy…