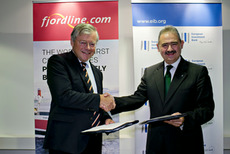 The European Investment Bank (EIB) is providing a EUR 124 million loan to the shipping company Fjord Line for the expansion of its fleet. Two new LNG cruise ferries are operating between Bergen, Stavanger, Langesund (Norway) and Hirtshals (Denmark). The ferries – MS “Stavangerfjord” and MS “Bergensfjord” – were delivered by the Norwegian shipbuilder Bergen Group in 2013 and earlier this year.

Thanks to this investment backed by the bank of the European Union, each of the new vessels offers daily services for up to 1 500 passengers and 600 vehicles. They have been constructed to the highest international and European environmental standards and are equipped with LNG-fuelled engines. The application of clean technology will significantly reduce emissions harmful to the environment from ships. The reduction of CO2 emissions can reach as high as 23% in comparison with the use of standard marine engines powered by heavy fuel oil.
Mihai Tãnãsescu, EIB Vice-President responsible for lending in Norway, said: “The EIB strongly supports the development of sustainable European transport. We therefore particularly welcome this agreement with Fjord Line, as the new vessels fuelled by LNG have improved the overall environmental performance of the company’s fleet. As they have also increased the capacity deployed on the routes between Norway and Denmark, this investment will contribute to the EU policy of promoting short sea shipping – a transport mode which is highly efficient not only in terms of environmental performance but also as regards energy efficiency.”
Peter Frølich, Chairman of the Board of Fjord Line said: “The EIB’s involvement is recognition of Fjord Line’s commitment to sustainable sea transportation between Norway and the EU. We are proud to be the first Norwegian maritime transport company to have signed a loan agreement with the European Investment Bank. The loan assures us long-term financial resources at a lower cost, thus providing financial value added for Fjord Line. The loan has been secured by a guarantee from the Kingdom of Norway, through the state support credit agency GIEK, ” he added. “Considering that Norwegian maritime traditions go all the way back to the Viking age, it seemed only right to have a heavy Norwegian presence in the design and construction of the ships, which was done by Bergen Group Fosen with many Norwegian contributors and suppliers. The beauty of these ships is much more than skin deep. They are built to shrug off the often-harsh conditions of the North Sea.”
Øyvind Ajer, Assistant Director General of GIEK said: “GIEK supports Norwegian exporters with guarantees for their buyers’ financing. The guarantees have supported the Norwegian maritime sector in developing environmentally friendly technology, and the Fjord Line ferries are a good example of this. The loan to Fjord Line represents the first guarantee arrangement concluded between GIEK and EIB, and may pave way for other similar financings within the scope of the EIB.”
Fjord Line’s new cruise ferries are both 170 metres long and have deadweight of 3, 900 tonnes. Each ship has 306cabins.
Both cruise ferries have four liquid natural gas (LNG) powered engines with 12 cylinders that produce 5, 400 kW(7, 300 hp) of power. Fjord Line’s choice of the most advanced engine technology available gives the new ships a propulsion system that is both the most profitable and environmentally friendly. In 2015, new and stricter standards for the sulphur content of ships’ fuel will enter into force in northern Europe. The LNG engines allow Fjord Line to meet these standards with a large margin. When moored, the ship uses auxiliary engines that run on diesel. However, these engines are fitted with powerful catalytic converters that reduce NOx emissions to about the level of the LNG engines.
Background information
About the EIB
The European Investment Bank is the long-term lending institution of the European Union and is owned by the EU Member States. It makes long-term finance available for sound investment in order to contribute towards EU policy goals. On the basis of one of its external mandates, the EIB has financed projects in EFTA countries since 1994. Norway is the EIB’s largest EFTA partner in terms of finance, and accounts for almost half of EFTA loans. To date, EIB financing in Norway under the EFTA mandate amounts to some EUR1.4 billion. For more information on EIB activity in the EFTA countries click here.
About Fjord Line
Fjord Line is a modern shipping company that offers safe and comfortable transport between Norway and continental Europe. The company is enjoying strong growth due to new ships and an expanded offering to passengers and freight haulers.
In July 2013,  MS Stavangerfjord, the first of Fjord Line’s two new and environmentally friendly cruise ferries went into service on the lines between Bergen, Stavanger and Hirtshals as well as Hirtshals and Langesund, while the identical cruise ferry MS Bergensfjord joined its sister ship on the same route this year, allowing daily departures all year long.
On 20 June, Fjord Line opened its new Sandefjord, Norway-Strömstad, Sweden line, served by the totally remodelledMS Oslofjord that is now making two round trips a day.
During the spring and summer, Fjord Line also operates the high-speed catamaran HSC Fjord Cat between the south Norway town of Kristiansand and Hirtshals, Denmark.
In addition to transporting passengers, Fjord Line also has ample capacity for all types of commercial vehicles and freight. The line’s cargo units in Norway and Denmark handle those services.
Fjord Line was founded in 1993 and has roughly 630 employees, of which 175 work on land in Bergen, Stavanger, Egersund, Langesund, Kristiansand, Hirtshals, Sandefjord and Strömstad while 455 work at sea all year. Staffing increases by about 250 people during the summer season. Fjord Line has a bond listed on the Oslo Stock Exchange. Ingvald Fardal has been CEO of Fjord Line since 2007.
European Investment Bank (EIB)Fjord Line
0 comment
0
FacebookTwitterLinkedinEmail