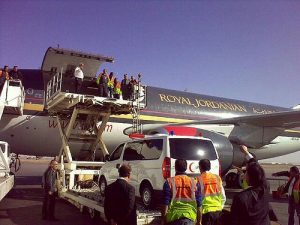 Unloading one of the relief flights in 2009

14 July 2014 – With the death toll rising daily in Gaza the ITF today called for an immediate ceasefire and launched an urgent humanitarian appeal for those affected.

Condemning the Israeli airstrikes into Gaza as a disproportionate response – that is leading to daily civilian deaths – to the Hamas rocket attacks into Israel, ITF president Paddy Crumlin stated: “We strongly condemn the strikes by the Israeli military which are being launched into one of the most densely populated areas in the world. We call for the urgent implementation of the UN Security Council’s call for an immediate ceasefire.”

Announcing an ITF relief programme, he continued: “We are already preparing the means to send medical supplies and equipment to Gaza as soon as this becomes practically possible. I am making an urgent call to all ITF-affiliated unions to provide financial support for a trade union humanitarian relief effort for Gaza, ” Crumlin concluded.

More than 170 civilians have been killed in Gaza in six days of continuous air strikes including many children; more than 1, 000 have been injured. Thousands of families have had to flee their homes. To date there have been no Israeli casualties from Hamas missiles.

The ITF’s member union the Gaza Bus Drivers’ Union has reported that the humanitarian situation in Gaza has reached crisis point. All normal transport operations are stopped and fishing boats have become victims of military strikes.

In 2009 a similar ITF programme delivered ambulances, food and medicine to Gaza during the attacks at that time (www.itfglobal.org/press-area/index.cfm/pressdetail/2954).

An Interview with John Faraclas in NOUSE