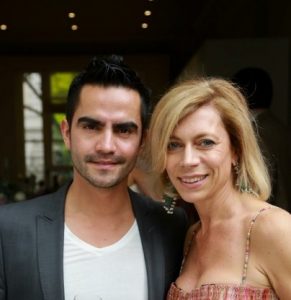 Party time at the private home in Notting Hill of art connoisseur Alessandra Franzi became the occasion to raise funds for charity – chiefly through transforming the premises into an art gallery for the evening.

Ms Franzi celebrated her birthday by inviting her artist and curator friend Carola Syz, who runs Carola Syz Projects, to organise an art exhibition at her house.

Guests feasted their eyes on paintings by Sanjeev Khandekar (from his Triumph of the Market series of acrylic works), and photographs from the Yin & Yang series by Ms Syz. There was a special treat when artist Dairo Vargas took up his brushes and palette for a live performance of the painting process, complementing a display of his works on paper and canvases.

Guests in the garden

During the five-hour soirée, Dairo Vargas enthralled the crowd of 120 people by creating new acrylics in his dramatic series about the paradoxes of the human condition.

He executed his contribution on a large board that had been fixed for the purpose to one of the walls of Ms Franzi’s home, and an auction towards the close of the evening of this piece and of some of the other works on show helped raise an impressive sum of money for the charity Shooting Star Chase. Ms Franzi had suggested her guests donate to the organisation rather than offer birthday gifts.

Ms Franzi is a keen supporter of Shooting Star Chase, and has been volunteering at its two hospices near London. The charity cares for babies, children and young people with life-limiting conditions, and their families.

The birthday evening featured refreshments with an Italian emphasis, reflecting the strong links of Ms Franzi, Ms Syz and many of the guests to London Italian circles,

The exhibition of paintings remained on view, by appointment, for a further week after the June 24 event.

Dairo Vargas, a graduate of Kensington and Chelsea College of Art, has exhibited widely in London and internationally. He accepted his first commission at the age of 16.

His latest project is said to confront the vulnerability of the physical human condition while evoking spiritual growth. A statement accompanying the work says: “The powerful raw bodies further challenge the condition of suffering and pain experienced through human life.  The form, dance moves and leaps of the genderless figures in the paintings represent liberation and freedom from worldly desires and the ultimate peak of the soul’s evolution.

“By depicting the ultimate values of love, life and death, Vargas is able to represent the inner journey of sentient beings in his beautifully drafted paintings.”

Shooting Star Chase says in its mission statement: “We are here to make every moment count. We support families from diagnosis to end of life and throughout bereavement with a range of nursing, practical, emotional and medical care.

“It costs £9.5m a year just to maintain our current level of care and, with around 10% of our income coming from government funding, we rely on our supporters’ generosity to keep the service running.”