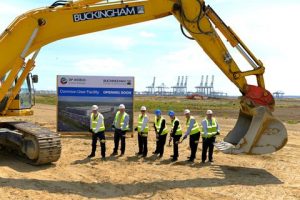 “The CUF will be a highly attractive proposition for SMEs that do not need a large standalone dedicated distribution centre of their own. However, it will also be valuable for larger businesses looking for supplementary capacity or an ‘incubator opportunity’ where they can build up volumes from an initial small start.”

Moore continued: “In addition, the CUF will allow businesses with existing commitments and infrastructure to add London Gateway to their distribution networks as a strategic devanning and collection point, bringing new agility and flexibility to their supply chains whilst significantly reducing costs.”

Construction on the CUF is due to be completed in late Q1 2015, with operations starting in early Q2 2015.

Tim Brown, Partner/Director of Buckingham Group Contracting stated: “We are delighted to have been awarded this exciting, high-profile contract. We understand the importance of this milestone in the development of the London Gateway Logistics Park and are looking forward to working with DP World to create a fantastic facility for logistics providers and their customers.”

Thurrock Council CEO, Graham Farrant, said: “With growth in new shipping lines calling at the port, the CUF building now underway and others in the pipework, Thurrock is set to become a hub for UK logistics companies.”

Leader of Thurrock Council, Cllr John Kent, said: “We are delighted to see construction underway on the first of DP World London Gateway’s distribution centres. It is a welcome boost to the local economy and for local jobs.”

With approximately 10 million square feet of warehousing and office accommodation, the London Gateway logistics park will be the largest of its kind in Europe.

The announcement of the CUF follows another major development in May, that Prologis, the leading global owner, operator and developer of industrial real estate, would speculatively develop a 316, 000 sq ft distribution centre at London Gateway.

About DP World
DP World has a portfolio of more than 65 marine terminals across six continents(1), including new developments underway in India, Africa, Europe and the Middle East.

DP World has a dedicated, experienced and professional team of around 30, 000 people serving its customers around the world, and the company constantly invests in terminal infrastructure, facilities and people to provide quality services today and tomorrow, when and where customers need them.

In taking this customer-centric approach, DP World is building on the established relationships and superior level of service demonstrated at its flagship Jebel Ali facility in Dubai, which has been voted “Best Seaport in the Middle East” for 20 consecutive years.
www.dpworld.com

Another cougar for wind power