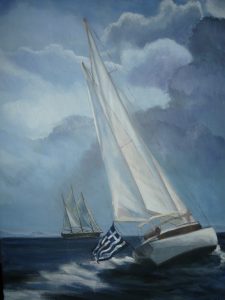 Tuesday 22 July 2014 – The FBI puts the worldwide cost of crimes linked to art at nearly $4bn a year – eclipsed only by the drugs and arms trades. And yet fewer than half of stolen works are insured.  (source: Lloyd’s of London)

In the run-up to Christmas last year, national news broadcast CCTV footage of a man in a hooded sweatshirt breaking in to the Exhibitionist Gallery in Notting Hill and making off with two artworks, Pyronin Y and Oleoylsarcosine, by Damien Hirst. Together they were said to be worth £33, 000.

Robert Read, Global Head of Fine Art at Hiscox, says that on rare occasions such thefts are to order, because someone wants these specific works in their personal collections. But, he adds, the thief often has a different motive altogether.

“It’s like a calling card to the criminal underworld. It does give you some credibility to turn up to a gangland meeting with the Mona Lisa under your arm.” Read says criminals might also use stolen art as collateral for a loan to fund a different crime altogether.

Charlotte Wilson, UK Specie Underwriter at Catlin, says high profile, brazen art thefts are unusual. “Often art is stolen by mistake. It might be in transit in the same container as a load of perfume the gang is targeting. The criminal then cannot sell the artwork and the art happens to be in the way.” Sometimes the art just gets dumped, or hidden, occasionally finding its way back to the insurers when rewards are offered.

“The art industry is pretty scrupulous about not paying ransom. We will offer rewards based on a conviction, ” says Read. Looser rewards are offered for information leading to the return of the stolen art, providing the police and insurers are certain the money is not going to criminals who stole the art in the first place. The value of those rewards is tiny compared with the value of the art itself. “If you steal a big and valuable work it is very hard to turn that into cash, ” says Read.

The art of recovery

Michael Burle, Class Underwriter at Liberty Specialty Markets, says recovery is the insurer’s problem, not the client’s. “The priority is the payment of the valid claim. Because there is an abandonment, any recovery is in the interest of the insurer.”

That means bringing in specialist loss adjusters, such as Mark Dalrymple of Tyler & Co. He has 35 years’ experience settling multimillion-pound claims, and recovered prized works of art through a network of ‘contacts’ within international crime fighting organisations and elsewhere. He’s the man who – after piecing together snippets of information from unconnected sources handed into police forces that had not spotted the significance of their tip-off – might hand over a reward.

Dalrymple insists it is much less cloak and dagger than it sounds. “The person claiming the reward is not criminally involved. Checking that is where the police come in. There is no question of us ever meeting under a railway arch with a brown envelope.”

His most famous case – few are talked about and Dalrymple never claims credit – was the Tate’s missing Turners. Stolen in 1994, insurers led by Hiscox paid out £24m. Fast forward to 1998 and the Tate offered to buy back its interest in the paintings and a deal was struck for £8m, including Hiscox approving the secondment of Dalrymple as an adviser to the Tate’s Trustees.

By the following year, 1999, the three thieves and their getaway driver had been convicted. In 2000, the first of the paintings, Shade and Darkness, was recovered in utmost secrecy. The second Turner, Light and Colour, was recovered in December 2002 when the Tate finally made the announcement public.

Dalrymple says crossing the necessary palms with silver had to be approved at the highest level. “A payment that facilitated the return of the painting was made to third parties – not the criminals. This payment was first approved by a judge in chambers in the UK, the federal prosecutor in Germany, and by the Charities Commission in the UK, ” he says.

Dalrymple gets paid for his claims settlement work as any loss adjuster would, but works on recovery of stolen artworks on a contingency basis. “If we get a success, it depends what input I have had. But within about five minutes, I have usually agreed a fee with the insurer that I think is acceptable, ” he says. There are sometimes private detectives and ex-police officers involved, as well as the official law enforcement services.