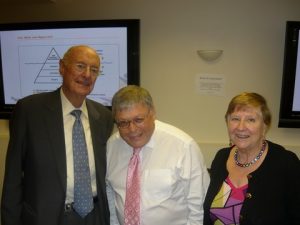 Businesses have to bring everyone ‘on board’ if they are to effect meaningful change that will improve profitability, the International Maritime Industries Forum was reminded at its last meeting before the summer break for 2014. David Buffin, managing director of Buffin Leadership International, outlined to the London event his formula for “Managing Change and Empowering Success” – the title of his talk. 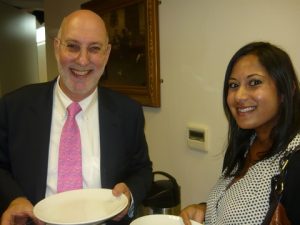 Mr Buffin told the July 14 meeting: “If you want to break through to change, everyone has got to be involved. In a very big business, if everybody knows what the goal is and what the future focus is, you are 90% of the way there, and then you are going to get the commitment [from employees]” he said. He recommended that people at the top create a change team, to produce a road map and a step change strategy.

Creating the right environment would release “massive energy and potential” in companies. Mr Buffin said: “One thing is permanent in our life, and that is change. How do we manage change, and how do we empower our people for success, and more importantly, how do we engage and ensure the commitment of our people for change?”

He emphasised: “The key is empowerment and connection of our people in the face of change.” Empowerment meant taking responsibility for ownership of what you do. The need was for vision and co-operation. “We see horrible examples of total lack of co-operation in every field of human endeavour.” 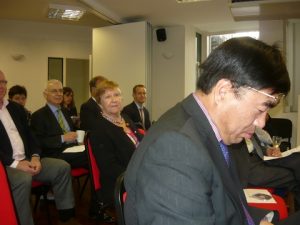 A view of the audience, left side rows

It was important to bring on the younger people in a business. The wisdom that comes from young people is that they begin to tackle situations and do not necessarily go with the status quo. With that comes inspiration.

He agreed with the saying “a happy ship is a good ship.” All change was driven, by and large, by human emotions. He warned that “money below the basic rate does not motivate, ” adding: “promotion, development and learning: that is what motivates people.” In terms of people development, that added value has to be facilitated, so that the business can “get on to the success cycle.”

A better style of leadership could save money. “People have to understand where they are going and to have some kind of a future in prospect.”

What of an employee who resisted the push for change, he was asked. He responded: “Why is it that they don’t agree? There will be a reason why he does not care.” In one instance, he had handled “30 or 40 people who did not care – and I could use a stronger expression – and they did not like it for four or five years. Now you go there, and they are fully empowered. The others will go with you once they understand it and once the trust is built. I am not saying it is easy. It takes time, but there are tools we can use.” The way people did things was because they were conditioned, or were fearful  to go beyond that. 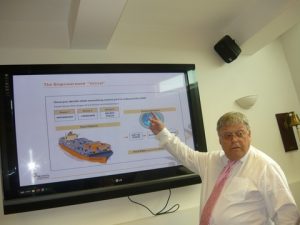 Mr. Buffin during his slide’s presentation

Mr Buffin said that what was important was what you believed “underneath, because that affects all who work for you.” He stressed: “You have to find things in life that give you a purpose and a sense of determination.”

Leadership on safety was a prime area, Mr Buffin said, and he called for industry to “focus on better quality language in terms of communication.”

IMIF chairman Jim Davis said that managing change was a subject on which instruction was badly needed, and said of Mr Buffin: “You have given us something to think about.”

Mr Davis thanked Mr Buffin for his hospitality and Jean Richards of Quantum Shipping Services for providing the venue and organisation.