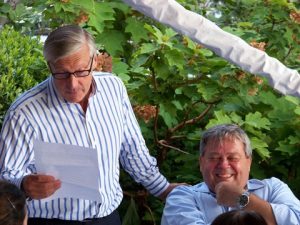 To mark his retirement this month from the American Club, where he has headed the underwriting team for many years, the managers arranged a farewell dinner in New York for Stuart Todd and his colleagues as well as leading members of the local marine insurance community.

Joe Hughes, chairman and ceo of managers, Shipowners Claims Bureau Inc., penned a spoof ‘Ozymandias’ for the occasion, which he dedicated to Stuart Todd on his retirement and return to the UK – as under.

Acknowledging his extraordinary contribution to the club’s affairs, Mr Hughes described Stuart Todd as “a P&I legend, whom I have counted as, variously, a competitor, counterparty and colleague over some 35 years of friendship.”