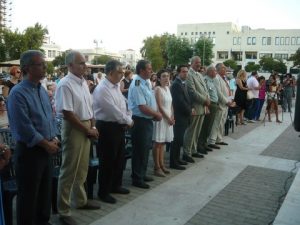 From the opening ceremony; sixth from the left is Notis Mitarakis, the greek undersecretary of Greece’s Ministry of Development

We where indeed lucky earlier on today to witness the official opening of this unique festival/exhibition at Chios’ Municipal Gardens. With Notis Mitarakis, the undersecretary at the Ministry of Development, as guest of honour and in the presence of the local political, municipal, prefecture, military and other authorities the island’s the Metropolitan, His Beatitude Mr. Markos blessed the event.

There were a few dozen of stands (just over forty-five of them) from all sectors of the industry, a reminder that the industrious inhabitants of Chios continue their 20 centuries plus tradition furthering local products, from mastic based ones, to wines and spirits, food products service et al…

Following the opening, at the specially created space, the Diminuta members gave a concert; an excellent performance by the swing trio Giorgos Papadogiannis, Efi Saranti and Kostas Patsiotis. 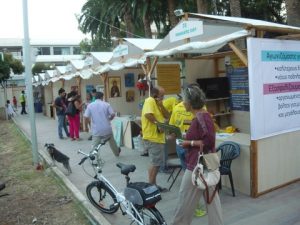 A view of the exhibition stands – left row

The events programme includes, and don’t miss it an array of very important events including various speeches, dance and poetic performances, arts exhibitions, the story telling on the “Mastiha Submarine, the film screening “The tree we hurt by Dimos Avdeliotis with the support of the Mastiha Growers’ Association at cine Kipos. The Mastiha fair at the Olimpi village an event not to be missed, as well as the photography exhibition with themes from Chios Mastiha at the Homerion Cultural Centre of Chios Municipality, one of the world’s best Conference and Exhibitions Centres! Chios is not just the capital of world’s shipping and one of the centres of seafarers, is also one of the cradle’s of Greece’s Aegean Culture and Civilization. Chios is blessed by nature too and except the famous mastiha, is also an area where its flora and fauna is more than unique; just to remind you the famous best seller by Mike Taylor on the “Illustrated Checklist of Orchids of Chios, Inousses and Psara!

Interestingly, one can attend starting tonight the food tasting of local products organised by the Regional Unit of Chios with the support of Enterprise Greece. For local, visitors – foreign and greeks, there will be daily events including the preparation of fresh chewing gum by the mastiha shop. 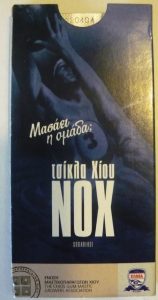 For the sea-sports faithful crowd, good to see the support of the Chios Gum Mastic Growers Association in producing a special designed pack depicting at its cover the internationally acclaimed Chios Water Polo team! The team which made headlines when it took the Greek Water Polo Cup in 1990, the first place at the mediterranean Championship in Israel in October 2005, five participations in the Len Trophy, one participation at the Euro-League 2007-8. The team which come 2nd at the Greek Water Polo Chanmpionships in 1996-7, 4th in 2002-3, and 2004-5, 3rd in 2006-7 and 4th in 2007-8! By buying these packs, you support financially  the team!

In a nutshell, these nine islands, Lesvos, Lemnos, Saint Stratis, Chios, Inousses, Psara, Samos, Ikaria and Fourni demonstrate their unique products and services capabilities on Chios, sending the appropriate message to all for all intents and purposes!

Pleased to see once again the sponsors: The Periphery Development Fund of the Aegean, The Chios Gum Mastic Growers’ Association, the Cultural Department of the Piraeus Bank, the EU National Strategic Funds for 2007-2013 (ESPA), the Chamber of Chios, The North Aegean Periphery Union, The Municipality of Chios and the Enterprise Greece – Invest and Trade; a great job done!

For us in the shipping industry it was more than a surprise to see that there was an interesting speech “The incorporation of refugees to the labour dynamic. The case of employment in the mastiha cultivations” by Dr. Andreas Michailides, president of the Cultural Association FAROS of Varvasi. The refugee issue which is an issue to be immediately tackled by any society, rests mainly with the arrival of refuges by see, a subject occupying and figuring top of the agenda, everyday in the local and international news, as 90 centum of the refugees arrive by sea… 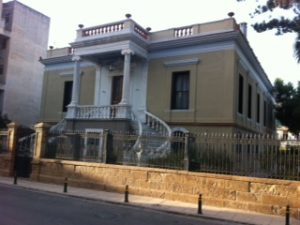 Moreover, the “Maria Tsakos” Foundation-International Center of Maritime Research and Tradition”, offered free guided tours- references on a daily basis to maritime institutions and traditional maritime places: including the centre, The Chios Maritime Museum, Vrontados, Lagada, Inousses and Kardamyla; a well thought participation to help, teach and inspire many interested in the maritime Greek and Chian adventure!

We look forward to next year’s events and wish to the organisers and participants, as well as to all visitors a great time and experience.

Costa Concordia makes it to Genoa