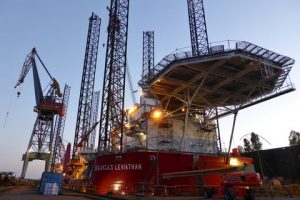 ‘Seajacks Leviathan’ and ‘Seajacks Kraken’ are prepared for their coming assignments, following a series of repair and renewal jobs by Shipdock Amsterdam. The shipyard, part of Damen Shiprepair & Conversion, had been commissioned for the two jack-ups by Seajacks UK Ltd.

The Great Yarmouth (United Kingdom) based company has assigned the shipyard various and different major and minor adjustments on the two jack-up sister vessels in between North Sea offshore windfarm and oil & gas installation contracts.

‘Seajacks Leviathan’ first had its blade racks cut loose and removed after completion of a wind turbine and propeller blade operation. Subsequently, the self-propelled jack-up had a heli deck installed in Shipdock’s 250 metrePanamax dock. This included all related drain and fire fighting piping. The heli deck had been prefabricated by Niron Staal, which too is a subsidiary of the Damen Shiprepair & Conversion division and is located on the shipyard’s premises in Amsterdam.

In addition, below deck reinforcements were installed to support the heavier mounts in view of future replacement of the lifeboat davits.

Shipdock Amsterdam’s major work on ‘Seajacks Kraken’ involved the replacement of the vessel’s two entire lifeboat davit sets. This included installing Niron Staal prefabricated foundations and the four new davits with their powerpack, cable, winch, electricity and hydraulic systems. This was finished off by surveyor-assessed test runs and loads test. Furthermore, the Kraken’s four legs were restored after an initial joint inspection round with the principal’s inspectors. Repairs involved S690 grade steel.

In addition to ship design and shipbuilding, Damen Shiprepair & Conversion offers a network of 15 repair & conversion yards worldwide, with dry docks ranging up to 420 x 80 metres.Conversion projects range from adapting vessels to today’s requirements and regulations to the complete conversion of large offshore structures.DS&C handles 1, 500 repair and maintenance jobs annually.