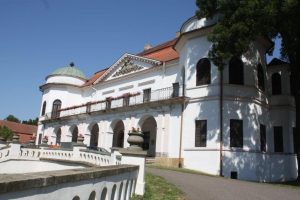 Evidence of ancient commerce between Greece and central Europe is on display in Slovak city of Michalovce,  By James Brewer

A depiction of two-wheeled chariots from the Bronze Age provides an intriguing link between the Ancient Greeks and the early civilisations of central Europe.

The horse tandem is etched into an amphora on show in the Zemplín Museum in the city of Michalovce, in eastern Slovakia.

Bearing its unique carved ornamentation, the urn is in fine condition, considering its age. It was one of several vessels reconstructed by the museum from ceramic materials it obtained in the 1960s. 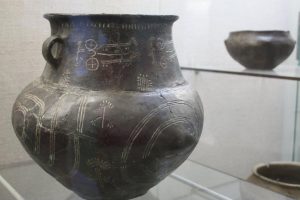 One of the museum’s 40, 000 archaeological pieces, it is a funerary ash container dating from around 1, 400 BC. Inside it were the cremated remains of an important person from what is now called Veľké Raškovce, a settlement in the region. The man was perhaps a chief, and it thought likely that the artist recorded a scene on the surface of the vessel from his funeral ceremony.

Most intriguing aspect is the depiction, on the neck of the container, of the two-wheeled light military vehicles. The vehicles are presumed to be part of the parade which transported the deceased to the burial place. This echoes the funeral games, including a chariot race, in honour of Patroclus who was killed in the Trojan War, as chronicled by Homer in Book 23 of the Iliad. 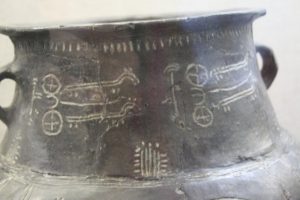 The scene, according to the Zemplín Museum, illustrates related ideological phenomena between the Mediterranean and more northerly regions.

Museum director Magister Maroš Demko says that this fascinating artefact points to Michalovce having been an important point on a trade route with Greece. It seems that amber from the Baltic region was traded for local obsidian, a volcanic rock used to make cutting tools. The city had become a salient trading centre during the Late Bronze Age.

In the Slovakian summer sun, the premises housing Zemplín Museum is a magnificent sight. This is a mansion built in the 17th century as a successor to a castle on the site. The noble Sztáray family, which ruled the city, owned the house from the mid-18th century (until 1944) and in the 1830s, rebuilt it to its present form. 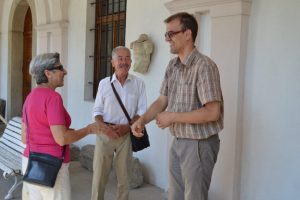 A section of the museum houses beautiful work from a different era. Since 1987 it has hosted an exhibition of the delightful genre oil paintings of Teodor Jozef Mousson, who was born in 1887.

This is the largest collection of the works of Mousson, who lived and worked in the area until 1944 and died two years later. Of French background, this artist became infatuated with the county of Zemplén and for nearly three decades recorded with vibrant light and colour its everyday life and its festivities. Among the subjects for his canvases were the colourfully-dressed women at spring and autumn fairs and markets in Michalovce, village activities, and landscapes such as seen in his TheBlessing of Laborec River. The river flows through the district, and the Museum of Zemplín sits on its banks. 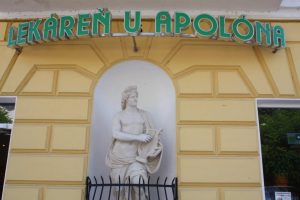 Mousson had studied at the Academy of Fine Arts in Budapest, and when in 1931 he moved to a villa in Hradek near Michalovce, he came to the favourable attention of the Sztáray family. 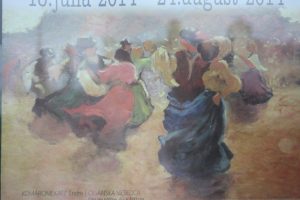 A smaller but representative selection of Mousson’s oeuvre is on display at the Vojtech Löffler Museum in Alžbetina street, in the centre of eastern Slovakian capital Košice. The work of a range of local artists including Mousson is set alongside the impressive output of the sculptor Löffler  (1906-90) for whom woman, love and family were recurring themes.