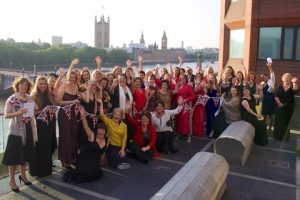 Four decades of remarkable progress – and the promise of more years of success – were celebrated at the 40th anniversary gala dinner of WISTA-UK, the founding body of the Women’s International Shipping & Trading Association.

Leading personalities from the maritime world congratulated WISTA-UK on its achievements, and the elevated status of the UK association was underlined by support for the black-tie event from some 140 members and guests. 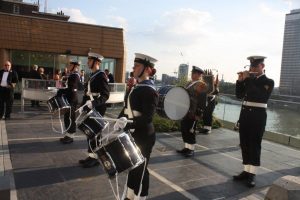 The venue was the restaurant of the International Maritime Organization, where burgundy coloured sashes decorated the dining chairs, calling to mind the ruby anniversary, and on a more sombre note the sacrifice in blood of seafarers in the course of their sometimes risky profession.

After a superb buffet with a wide choice of dishes was served, WISTA-UK secretary Bridget Hogan (of the Nautical Institute) invited one member each to speak about one of the four decades since a small group of women shipbrokers met for a Christmas lunch in London and decided, tentatively, to formalise a more substantial network.

That initiative has grown into the international WISTA grouping, which includes more than 1, 800 individual members in more than 30 countries.

Jean Richards of Quantum Shipping Services recalled the reluctance of the Baltic Exchange, through which much shipping business is done in London, to admit female members; and when it did let women in, “it was again a gesture.” Ms Richards said: “Women had to fight because all the business was done not on the trading floor, but in the bar, and… if you were a woman, you had to go to the cocktail lounge. You could not even do a deal because the bloke did not want to buy you a gin and tonic.” Ms Richards regretted that the exchange was still “not very pro-women.”

Maria José Lima, from Oporto in Portugal, said that she became a WISTA-UK member in 1986, after meeting one of the founding members, Margaret Llewellyn. That meeting was followed by an invitation to attend her first WISTA Conference in Madrid. She gladly accepted the invitation “and still recall that I thought the speakers were awful.” After the Madrid gala dinner, she and a group of other members could not find their way back to their hotel and saw a bus about to make its way back to the terminus. They stopped the bus, got in and told the driver he had been ‘hijacked’ and asked him to take them to the hotel. It occurred to them that the police would soon be at the hotel to find out what was going on, but thankfully nothing happened. “On the following day, ” said Ms Lima, “I found myself in deep thought: either I had joined a bunch of ‘mad girls’ (as we still like to be called) or my whole experience probably had to do with ancient frictions between Portugal and Spain. 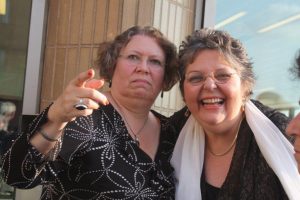 “I was totally wrong; the following year I joined the Conference in Oslo and started placing total trust in the WISTA organisation, and since then have only missed half a dozen Conferences.

“Over the years the original concept was revamped for the better and I have to thank WISTA for all that I have learned during the various conferences; and even now being retired I still have a passion for WISTA and look forward to attending a few more such conferences.”

Ms Hogan said she had been touched by the way her many colleagues had supported the industry. She recalled the significance of the first international endeavour which marked the 25th anniversary of WISTA, the production of a ‘shipping calendar’ which she, Joanna Meadows (now in Singapore) and Maria Dixon had developed. The calendar was promoted as a way of raising money for IMO children’s charities. “We saw this as a way of helping WISTA move forward, and we had a massive response from all over the world, ” said Ms Hogan. 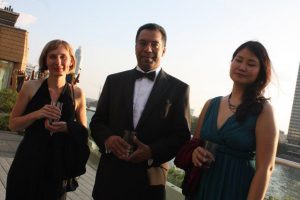 Talking of WISTA’s growth in the decade beginning 2000, Sue Terpilowski of Image Line PR, recalled that she was invited to a WISTA meeting by a lawyer “and had my suspicions right from the start” but “I have had a fantastic voyage to tell, and have met so many people round the world.”

Turning to the current decade, Tony Browne of  T-StarMET Maritime Education, said he had got to know about WISTA while researching maritime training where “I was alarmed that all the teaching staff were male, and that did not seem right.” He further learned that only 0.4% of engineers at sea were women.

Mr Browne is one of the male member of WISTA-UK, where formally membership is confined to female executives. He applied to join WISTA-UK “and I think the only reason I got through was that my name is Tony. They had to have an awful lot of self-confidence as a women’s organisation to let me in!” 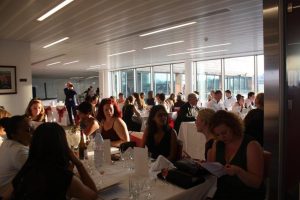 Studying the menu for the gala dinner.

Almost all the women working on ships were in the role of stewardess, said Mr Browne, but owners of some of the smaller vessels had done a good job in taking on women for navigation.

Looking to the future, Victoria Martinez-Magiera of IHS Aerospace, Defence & Maritime, said: “We are here because of our passion for the [maritime] industry. WISTA-UK is a big family that will stick with you for life and encourage you to reach your goals – and that is one thing our generation needs. I hope to see you on the 50thanniversary of WISTA-UK!”

Maria Dixon, president of WISTA-UK, said: “This WISTA-UK 40 anniversary has taught our members, especially the new ones, the importance of being ‘us’, the responsibility of showing a good image, and above all team work and leadership. The Came By Ship campaign that helped us forge new alliances, our May Grand Debate, the Last Wednesday of the Month Shipping Drinks, the Liverpool Open Forum and the Gala Dinner have contributed to unite our members, and to make them feel proud of the work done.

“Those women who have spoken at the dinner have stories that are unique and inspirational.”

Ms Terpilowski paid tribute to the unstinting work of Ms Dixon, saying, “Maria, without you there would not be a WISTA-UK.” 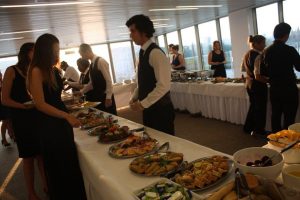 Canon Ken Peters of the Mission to Seafarers, who has long been vocal in his support for WISTA-UK and industry initiatives over piracy and other issues, displayed his wonted humour in the course of saying grace, adding the couplet: “Beauty and brains are all present in WISTA, and I could go on to list a… few more things…”

Maria Dixon thanked Pamela Tansey, senior deputy director in the technical co-operation division of IMO, for her welcome to the auspices of the IMO. Ms Dixon extolled the “many talents” represented in Ms Tansey’s work in encouraging enhancement of education, competency and career development for women seafarers and other female workers and officials in the maritime sector.

Maria Dixon praised “my cadets” – the band of London Borough of Sutton Sea Cadets, whose unit name is TS Puma, for providing stirring music on the IMO terrace during the champagne reception, and after the meal.

Ms Dixon expressed thanks to the catering manager of IMO, and to two law firms for their support for the event: to Holman Fenwick Willan for sponsoring the reception, and to Patton, Moreno & Asvat for sponsoring the seating arrangements.

An auction and raffle raised more than £1, 000 for the three charities chosen by WISTA-UK: the Mission to Seafarers, the Sailors’ Society and WISTA-Philippines Build-a-School Project in Cogon, Guiuan municipality, which was hit by Typhoon Haiyan in November 2013.

Lastly,  Jean Winfield, Managing Director of PR and Marketing agency Jeanius Consulting, was presented with the Entrepreneur of 2014 award (reported here on 31 July).

Greetings from Panama, there is a wonderful festivity atmosphere here as the country is celebrating the centenary of the Panama Canal. All will be revealed next week!

Once again thanks to everyone in WISTA-UK, 2014 has been a very busy year, as we needed/wanted to honour those women that started WISTA in 1974.

The UK members and the support of the industry is a testimony that WISTA-UK will not fade, au contraire, WISTA-UK is here to help our members and shipping women worldwide by offering networking, mentoring and a meeting point to talk about shipping and be understood!

Thanks John for your support as always.
Maria Dixon
President
WISTA-UK