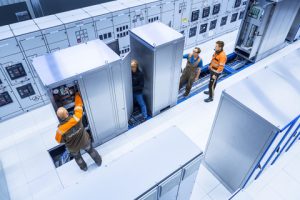 Wärtsilä’s test facility is equipped to carry out full scale testing of the LLH integrated with Wärtsilä distribution system.

At the ONS 2014 exhibition being held in Stavanger, Norway from August 25 to 28, Wärtsilä will launch its new Low Loss Hybrid (LLH) innovation. The Wärtsilä LLH utilises different power sources in combination with energy storage devices to operate the prime movers closest to their optimum performance. In addition to annual fuel savings of up to 15 per cent, depending on the type and configuration of the engine and mission profile, the LLH ensures a substantial reduction in exhaust gas emissions.

The overall hybrid control system is the key element in the total control and stability of the ship’s electrical system and the energy flows. The Wärtsilä LLH system is integrated with the inverter control units and interfaces with the conventional power management system. The total energy storage system is approved according to the new DNV class rules for battery power. The Wärtsilä LLH is suitable for application in a variety of market segments, including offshore vessels, tugs, ferries and coastal vessels, for new building as well as to upgrade existing installations.

A key feature of the Wärtsilä LLH is its ability to reduce transient engine loads that cause increased fuel consumption and added emissions. Furthermore, by increasing the power redundancy, the system allows the engine to operate closer to its optimum design point where it has highest efficiency and least emissions. Reduced maintenance and increased system performance through rapid response from the energy storage system are also among the benefits offered.

“Fuel efficiency and a reduced environmental footprint are central to the current and future needs of the entire marine sector. The Wärtsilä Low Loss Hybrid system supports both of these aims and is an important enabler for energy and cost efficient shipping. We look forward to introducing our customers to this concept at the ONS 2014 exhibition, ” says Juhani Hupli, Vice President, Electrical & Automation, Wärtsilä Ship Power.

The Wärtsilä LLH was earlier this year installed and tested aboard the Platform Supply Vessel ‘Viking Lady’. A comprehensive measurement programme that monitored transit mode in heavy weather conditions, critical operations, and standby mode confirmed actual fuel savings of 15 per cent. For this particular vessel, such savings would give an estimated payback time of less than four years. Emission reductions were also substantial, with local emissions in harbour virtually eliminated.

Wärtsilä will be exhibiting at stand number K115 at ONS 2014.