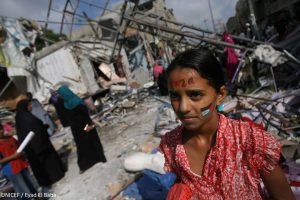 26 August 2014 – Secretary-General Ban Ki-moon has welcomed today’s announcement of an open-ended ceasefire for Gaza, brokered under Egyptian auspices, and said he hopes this will lead to a political process aimed at achieving a durable peace.

“A brighter future for Gaza and for Israel depends on a sustainable ceasefire. It is up to the parties to live up to this responsibility, ” said a statement issued by Mr. Ban’s spokesperson.

“After 50 days of profound human suffering and devastating physical destruction, any violations of the ceasefire would be utterly irresponsible, ” the statement added.

Mr. Ban noted that any peace effort that does not tackle the root causes of the crisis will do little more than set the stage for the next cycle of violence, calling for, among others, an end to the Israeli blockade of Gaza and addressing Israel’s legitimate security concerns.

“The Secretary-General remains hopeful that the extended ceasefire will act as a prelude to a political process as the only way of achieving durable peace, ” said the statement, which added that the two-State solution is the only viable option.

“The Secretary-General urgently calls on both parties to return to meaningful negotiations towards a final status agreement that addresses all core issues and ends the 47-year occupation.”

The UN estimates that the latest wave of violence, which began eight weeks ago, has killed 2, 101 Palestinians and 67 Israelis, in addition to forcing 475, 000 Palestinians to seek refuge at UN facilities inside Gaza.

News Tracker: past stories on this issue