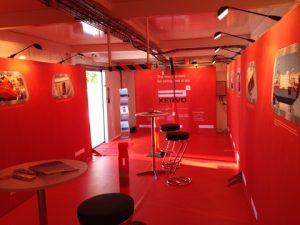 Xervo has put its extensive knowhow behind a new safe and cost-effective lifeboat system for the SOLAS market. Come experience it at the SMM conference in Hamburg September 9-12.

The Danish lifeboat producer Xervo has introduced a new SOLAS version of its popular Boat-In-A-Box lifeboat system. The company has had great success with a NORSOK R-002 version of this state-of-the-art lifeboat and rescue boat system, which was developed in co-operation with the offshore industry.

At OTC in Houston, Xervo spoke with several companies interested in making use of its development knowhow to create a SOLAS version of Boat-In-A-Box. That product is now a reality.

”We built the company around a clear safety philosophy, which is that a single safety breach must never lead to a dangerous situation. On that basis, we have had the luck and skill to develop a lifeboat system that we believe is the safest on the market. We won’t compromise that philosophy, but we can use our experience to create a system that meets the SOLAS standards and more, ” says Esben Juul Sørensen, CEO at Xervo.

Premiere at the world’s largest maritime convention
The SOLAS version of Boat-In-A-Box will receive its international premiere at the SMM convention in Hamburg at the start of September. The system will be presented in co-operation with Fassmer, which has built the structural base that will lift the Boat-In-A-Box-system five meters above the floor so that all the system’s details can be experienced at close range.

Juul Sørensen looks forward to being able to deliver excellent quality to the SOLAS segment.

”Automobile manufacturers often develop technologies that are first used in their luxury class models, and then later become available in their mass-market vehicles. In the same manner, we can use experience from our NORSOK systems to make a safe lifeboat system for the SOLAS segment. This means we have something meaningful to offer to the UK and US markets, for example, ” Juul Sørensen says.

“Our meetings at the OTC proved to us that fleet owners are very committed to their employees’ safety, and they can see a major advantage in being able to call on the knowledge we have built up over a number of successful projects. We have great expectations for our SOLAS system, and we are really looking forward to being able to show the product at SMM in co-operation with a major player like Fassmer, ” says Juul Sørensen.