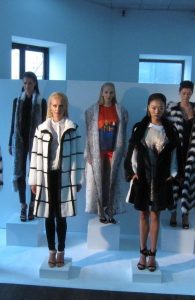 Oh my Gosh! That was a phenomenal day full of events that dominated the fashion week and were hugely discussed! And I’ll start with the newly redesigned Salon, which after some shows this season, proved to be another amazingly customizable space at the Lincoln Center tents. You can have an elaborate installation such as the glossy dreamy floor at Lie Sangbong or the plain simplicity other designers would seek.

Taking place at the Salon, the Taoray Wang show made me think of the increasing allure of Chinese fashion in the global market. Another Wang on the scene, and equally promising, I dare saying! She might be an established designer in China for some years now, but she now opens up internationally with her first namesake collection; a powerful mix of Asian and European influences that places her among my favorite designers for the season. The Chinese-born designer – who emphasizes the magnitude of the successful woman – got inspired by the movie Black Swan, muse Natalie Portman, and ballet in general, to produce a very fresh interpretation with clean, simple, and elegant designs and a soft artistic message. It was luxurious and serene, avant-garde and definitely not too fussy or feathery as one would expect it to be.

The next wow moment of the day was at the beautiful Crown Building close to Bergdorf (730 5thAvenue) at the 23rd floor Royal Terrace Penthouse, where Helen Yarmak presented her elaborate and transformable furs teaming up this time with designer Edward Roth who is doing exquisite prints on expensive Italian silk. It was an incredible combo of colors and a collaboration that would extend to the permanent sharing of this space between the two designers; a showroom that will include Yarmak’s convertible furs and Roth’s limited edition womenswear. Yarmak designed mostly furs for women but also some pieces for kids and men, in black & white, blue, green, red, and orange. Most of the coats had detachable parts to be worn in multiple ways, also as vests, shawls, and scarfs. You could easily unclip and remove the sleeves, the dramatic collar, the hoodie, or the length of it, or you could wear a double-faced coat inside-out. Even more fashionable were the bird and window pane motifs on some of them. With immediate response from the fashion industry, and some rich Russian ladies trying on her creations on the spot, Helen is predicted to sell a lot this season. To this beautiful crowd, add up crowned beauties in presence, such as Miss USA, Miss Teen USA and Miss Universe. Helen is already dressing the rich and fabulous, and she’ll keep on doing that!

Finding my way through extravagance, I later headed to Phillip Plein’s much-discussed store opening in NYC (625 Madison Avenue, btn. 58 & 59 Streets), one of the visible signs of his aggressive expansion to the global market with 40 stores opened, or to be opened, all over the world by the end of this year! The super talented German-born designer, advocate of dark glamour and rock & roll luxury opened his first boutique in Monte Carlo in 2009, and ever since, he keeps on adding coveted locations; recently Qatar and soon Mykonos. He showcased his far-west-themed FW14 collection in Milan with singer Rita Ora and top model Naomi Campbell on a catwalk show that finally got in flames (real and virtual), and he was there right in front of us at a star-studded opening in Manhattan. “It’s a big step, ” according to the designer, who got us introduced in a world full of studs, crystals, leather, fur, and other decadent decorative elements. Philipp, who started his career designing furniture, is not only selling men’s and womenswear in this store. You can also buy the furniture and other items exhibited there, including the huge crystal-studded skull in the entrance, the skull-decorated chandelier and other pieces. People attending the event and sipping endless champagne were seriously rock & roll, and I had lots of fun meeting them!

But the ultimate surprise of the day was the extraordinary Polo for Women 4D water show presenting the SS15 collection on a virtual catwalk inside Central Park, on the lake at Cherry Hill. The popping up, alternating images of holographic models walking on the water included a background of various NYC landmarks such as the Brooklyn Bridge and the Highline. We were all left speechless and at moments you could listen to the cheerful voices charmed by the spectacle. In the same location, on a moonlit night, right before this high-tech show, guests were served lobster rolls in branded Ralph Lauren stands by models dressed in the all-American attire, and a small orchestra was filling up the magically lit setting with beautiful tunes. By the end of the night, guests had the option to be transferred back to the 72nd Street entrance with golf cars. As always, MrRalph Lauren is the perfect host!

I still can’t describe the feeling of the day, since I’m getting too emotional when I’m thinking of it! I’ve been over a decade in this industry, writing about fashion, yet this world can’t stop exciting and motivating me, especially when in New York. To get grounded that night, I really had one more drink (on top of the champagnes during the events) as well as good simple food with quality ingredients at Fat Radish’s Upper East Side sister-restaurant called East Pole. It was a delicious rustic dinner that helped me balance off the bedazzling atmosphere of the last 12 hours!

Customers vote Seatruck ‘Irish Sea Shipping Line of the Year’, for the second year in succession