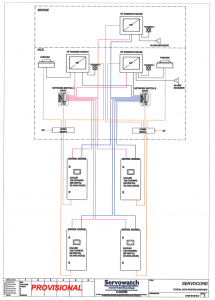 Servowatch Systems, the global specialist in marine automation and system integration, has introduced ServoCore to the marine market, a new cost-effective AMC (alarm, monitoring and control) solution for the commercial shipping fleet.

The UK-based company, a business unit of the Electrical & Automation division of India’s engineering conglomerate Larsen & Toubro, has adapted its state-of-the-art technology inherent to the bespoke automation and integration solutions supplied to the naval and specialist ship sectors to meet the commercial requirements of the merchant ship sector.

Speaking at the product launch today at SMM, Servowatch Systems’ Research & Development Director, Stafford Williams, said: “Drawing on our knowledge and expertise from over 40 years in systems integration development, we have designed a new COTS (commercial-of-the-shelf) range of entry level systems that offer a reliable and highly cost-effective solution that meets the robust demands of the commercial shipping fleet.”

Wayne Ross, Chief Executive Officer, Servowatch Systems, added: “The development means that we can now deliver the same functionality and flexibility as our tailor-made ServoFusion range but for significantly less investment, making it a more commercially attractive AMC option to operators of standard tonnage.”

The standard ServoCore packages are future-proofed for the integration of additional components, the AMC option is an entry-level system available with three I/O (input/output) configurations, with an expansion capacity.

South Korea’s Dae Sun Shipbuilding & Engineering Co Ltd has given Servowatch Systems its first reference for the ServoCore AMS solution. ServoCore AMS will be installed aboard three 17 500t multi-purpose cargo ships currently under construction for an undisclosed shipowner operating out of the Middle East.

“ServoCore is a real winner for shipbuilders, given the complexity of existing ship automation and integration solutions. It is a fit and forget, plug in and play system offering shipbuilders faster installation and shorter lead times, since the engineering involved has been significantly reduced, ” said Martyn Dickinson, Director, Sales Marine Business Unit, Servowatch  Systems.

As with all Servowatch products, the company’s dynamic software solution WinMon™ is at the heart of the new ServoCore AMC solution.

The ServoCore and ServoFusion solutions can also be expanded to incorporate the ship safety and security management aspects of the company’s new ServoSecurity offering. This can be integrated to manage shipboard fire, flood and emergency situations, and optimising evacuation processes. The concept is already gaining traction within the damage control function aboard Naval vessels.

ServoSecurity made headlines in 2012 when Servowatch secured the contract to provide the Maritime Surveillance and Situation Awareness solution, as the primary marine surveillance tool used by the principal authorities during the London Olympics.

ServoCore AMCS is a flexible system that utilises techniques developed over the past 39 years in the marine automation industry.

Data Collection & Control Devices may be configured to accept various I/O configurations, including serial inputs from other systems. Built in test functionality monitors performance to ensure full system capabilities are maintained. For increased survivability, networked control algorithms and a unique hot-swap capability is an available option.

All alarm, monitoring and control information, regardless of the format required for integration, is processed and displayed on custom designed graphical mimics.

The mimics depict all ship systems arrangements, for example: propulsion

Workstations are configured for user profile and may include password protection, user identity recognition, or other security access systems. The user profile may be transported from station to station.

The system is expandable, progressing to including tools for advanced equipment health monitoring and dynamic analysis. The tools provide supporting information that assists with maintenance scheduling, operational safety limits, and condition reporting. The graphical package enables operators to train on systems mimic designs as actually installed in the ship for true realism.

EURONAV files registration statement for proposed IPO in the USA