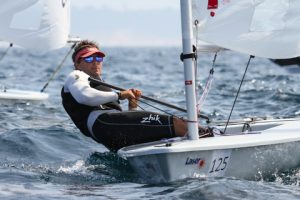 Monday 15 September 2014 – The Santander 2014 ISAF Sailing World Championships features more than 1, 000 sailors from 81 nations competing on the waters off the Spanish city.

Many of the sailors have different backgrounds and entered the sport through various routes to get to where they are at today. At Santander 2014 an Emerging Nations Program is assisting many promising sailors who do not have all of the funding and support they require.

Kenya’s Teddy Ndaro is part of the Santander 2014 ENP and explained what it is all about, “The Emerging Nations Program brings together all of the small sailing nations and it tries to help them get to the events, help them get ready and to perform at a level that is required at this type of championship.”

Coaching support, guidance, boats, accommodation and food is provided to the ENP sailors and for Ndaro it has been a huge boost, “I wouldn’t be here if it wasn’t for the Emerging Nations Program because to come to such a big event is a huge cost financially. ISAF and the organisers have really helped us by giving us accommodation, food and equipment. That takes a big weight off of our shoulders and that has what enabled me to come here.

“Just being here is amazing. I never dreamt of being at such an event.”

The Perth 2011 ISAF Worlds started the Emerging Nations Program and the work has been continued into Santander and will continue into Aarhus 2018.

Laser and Laser Radial sailors from Peru, Dominican Republic, South Africa, Indonesia, Bulgaria, Seychelles and many others make up the Santander 2014 Emerging Nation Program. For Iceland’s Hulda Hannesdóttir it has been a strong learning curve, “Sailing is not so big right now in Iceland so just coming here is a big opportunity to just sail with big fleets. We have had great coaches and I have learnt so many things.”

And for the Seychelles’ Rodney Govinden, “The Emerging Nations Program has helped us a lot because it provides us with accommodation and boat. Since last year when the program started I participated in the test event and training camp so it helped us a lot in coming here and competing in the world championship.”

Many of the ENP sailors continue to fight for personal bests in Santander and with Laser and Laser Radial racing set to resume on Tuesday 16 September the fight will continue.