Dieter Berg of Munich Re is elected new president of IUMI… 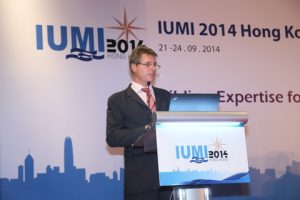 Dieter Berg of Munich Re

Dieter Berg of Munich Re is elected new president of IUMI and warns of softening premium rates,  By James Brewer in Hong Kong

Six hundred and thirty-two participants in the 2014 conference of the International Union of Marine Insurance are leaving Hong Kong with messages from the outgoing and new IUMI presidents calling for underwriting discipline and new efforts to raise the profile of the marine insurance sector.
Ole Wikborg of the Norwegian Hull Club was accorded a standing ovation as he handed over the presidency after four years to Dieter Berg of Munich Re.
Mr Berg expressed hearty thanks to the Hong Kong Federation of Insurers and its organising committee. “You  have done a wonderful job, ” he said.
Earlier Mr Wikborg warned that loss ratios in the sector were unsustainable long-term and underwriters could not expect capital providers to go on supporting that. He said that “our business is heavily influenced by elements that we are unable to control [such as political sanctions and solvency II rules] but we must adapt to them.”
He stressed the importance of underwriters understanding the risks they wrote.  He said that he had encouraged hull underwriters to become ‘shipping people, ‘ cargo underwriters to be experts on transport, and energy underwriters to become “technology sub-sea freaks.”
Mr Berg paid tribute to Mr Wikborg for the passion and enthusiasm he had shown for IUMI.  “I am convinced that under his presidency, IUMI has made great strides in the right direction.”
Mr Berg said that he had four priorities for his term of office: strengthening further the political influence of IUMI, improving the standing of marine insurance within companies, raising public awareness of the speciality, and raising public awareness of the role of marine insurance.  Although marine was on average only 3% or 4% of the non-life portfolio of composites, we are the most international line of business and we are of strategic importance to global trade.
IUMI would work further on strengthening its global network. “This is a unique platform worldwide.”
The new president said that although the global economy had improved recently, interest rates remained low and yielded no return on premium income at a time when “we are rapidly sinking into a soft market cycle. New players had brought more capital into the offshore energy market, and the question was whether they would enter marine as their next playground.
Dieter BergHong KongIUMIJames BrewerMunich REOle Wikborg
0 comment
0
FacebookTwitterLinkedinEmail

Greece: How feasible is an early exit from the IMF lending program

Transeuro Energy to be delisted from Oslo Axess