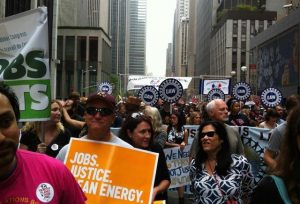 Global unions including UNI, PSI, the ITF and their affiliates were among over 650, 000 people around the globe who took to the streets on 21 September to inspire world leaders to take ambitious action on climate change.

The 2, 000 or so people’s climate events around the world preceded the historic UN summit on climate change in New York taking place today (23 September). The marchers and activists were demanding cuts in carbon emissions and a just transition to a green economy.

David Hansen Miller, ITF strategic research, said from New York: “It was a really impressive trade union presence and an extraordinary march to witness. The events here and in Australia, London and around the world gave the marchers an unprecedented opportunity to demand a global society that works for people and the planet. We hope world leaders will act courageously.”

More than 700 ATU members at the New York march promoted public transit as one of the best and easiest ways to combat climate change.

At a fringe meeting at the ITF’s first paperless congress, in August, transport workers renewed their commitment to act on climate change and took stock of their recent actions. These included the ITF signing a memorandum of understanding with the international body of employers in public transport, which commits both parties to extend public transport in order to reduce carbon emissions and create green, decent jobs.