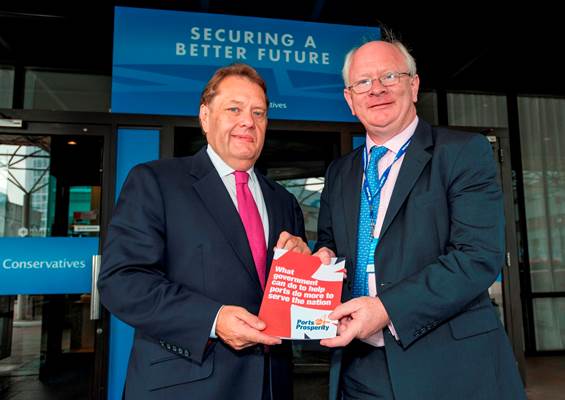 Rt Hon John Hayes MP, Minister of State for Transport with responsibility for Ports, welcomes the manifesto with ABP Chief Executive James Cooper at the Conservative Party Conference in Birmingham

United Kingdom Major Ports Group (UKMPG) has launched a significant new Manifesto – Ports4Prosperity – for the UK ports industry at the Party Conferences in Manchester and Birmingham.

Representing 41 of the UK’s major ports, UKMPG is calling on the Government to work with the ports sector to support UK industry.

UK ports play a huge role in delivering national prosperity; 95% of the nation’s trade in goods is moved by sea. UK ports support 400, 000 jobs and contribute over £21 billion to the economy every year.

The Manifesto sets out five key points. It urges the Government to ensure the EU works for, not against, UK ports. The proposed EU Port Services Regulation is a major threat to the nation’s ports industry and the launch of the Manifesto coincides with industry calls for the Government to defend the national interest by blocking or exempting the UK from the European Commission’s plans. Resolving the issue is now a race against time with the Italian Presidency aiming to reach a political agreement by 8 October.

The Manifesto also appeals for a joined up approach across Government, better road and rail links; support for training and continuous improvement of health and safety; and a better land and marine planning system which will allow ports to invest when and where necessary.

The Rt Hon John Hayes MP Minister of State for Transport with responsibility for Ports welcomed the manifesto and said: “This government recognises that the UK ports sector is an important contributor to our economic growth. I am proud to have forged such a close partnership with the sector through the strategic partnership plan for ports developed jointly with industry and across government.

“I commend the work of the UKMPG in delivering our shared goals.”

Speaking at the launch event at the Labour Party Conference in Manchester, Shadow Minister for Transport, Gordon Marsden MP, said: “I was delighted to help launch the Ports for Prosperity manifesto which is full of laudable measures to help us recognise ports as the great economic assets they are.

“We need national and local government to put ports at the heart of intelligent, long-term planning. But even more pressing today is the need for ministers to be robust in Europe and stop new regulations placing unnecessary burdens on our vibrant, competitive ports and jeopardising the working conditions of those employed within them.”

UKMPG Executive Director Richard Bird said: “Ports are vital for the UK but do not always receive the attention they deserve. We do not look for subsidy but need Government support in other ways so we can continue to provide the high quality and competitive service our customers and the country rightly demand.”

The launch events were supported by Associated British Ports (ABP), which owns and operates 21 UK ports.

ABP Chief Executive, James Cooper, said: “The ports industry makes a massive contribution to the economic wellbeing of the UK but there is so much more we could do, and we urgently need the support of Government to make this possible.

“That is why ABP is pleased to be able to support Ports4Prosperity. This Manifesto sets out the key requirements of the industry to UK Government, which will enable UK ports to continue to deliver growth and prosperity for the benefit of the nation.”

Make the EU work for ports not against them
Unlike many other member states in the EU, the UK’s ports operate on a commercial basis and largely without subsidy. The EU needs to do more to promote fair and unsubsidised competition between major international ports. Other EU measures such as the proposed EU Port Services Regulation would impose red tape, cause uncertainty and put investment and jobs at risk. These must be fought off.
Make better road and rail links to ports a priority
Parliament believes that better road and rail links to ports should be a priority. We agree. Better road and rail links to ports make it easier for businesses and exporters to access global markets, helping boost trade, increase growth and create more jobs.
Develop a single strategy for ports
Ports are essential for trade, competitiveness and growth. That’s why a joined-up approach across government is important. Government departments should work better together and with the industry to maximise the benefit of ports for the nation.
Create a planning system that backs investment
A better land and marine planning system will allow ports to invest when and where it is needed. It can also help unlock ports’ full potential to help rebalance the economy, and drive export-led growth. Ports can be ideal locations for new manufacturing industry and distribution centres. Planning decisions need to be based on up to date and accurate market demand information.
Help boost skills and safety
Port safety has improved dramatically in recent years. But more still needs to be done. The Government can contribute through support for training and apprenticeships and strong partnerships working on health and safety.

First impressions of the underwriting room