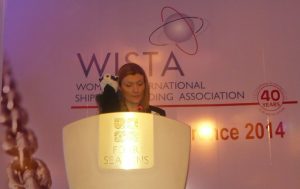 October 17, 2014—At its International Annual General Meeting & Conference, nearly 300 members of WISTA (Women’s International Shipping & Trading Association) and conference attendees from 35 countries were treated to an energetic, exciting and exceptional conference.  The theme chosen for the conference was Shipping Connects, with topics including the Future of Ship Finance; Offshore Energy and Shipping; and Excelling in Shipping Services. 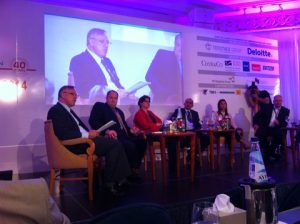 The opening panel moderated by Capt. Eugen Adami, president of the Cyprus Shipping Chamber; next to him is Sergey Popravko, Karin Orsel, Maurice Baker, Catherine Lapointe and Capt. Kuba Szymanski (Themis Papadopoulos  there but not seen in this picture)

Despina Panayiotou Theodossiou, President of WISTA Cyprus, kicked off the conference with words of enthusiasm in hosting the annual event during WISTA’s 40th Anniversary year, stating “What started as a Christmas lunch among colleagues has become the recognized organization we know today, with a presence in 33 countries and over 2000 members – women and, for the last few years, men, at the management level in the maritime industry.”  She went on to share that the theme of the conference was given careful deliberation and chosen to encourage the exchange of ideas on some of the most current and interesting topics facing the maritime industry.

The conference was refreshing in its directness, featuring an inviting stage of panelists discussing and debating questions posed by thoughtful and provocative moderators.  From the opening session, which challenged representatives from several shipping companies and trade associations   on their views of performance through and following the financial crises, to the final session, which offered the forward thinking idea of salvage companies participating in ship design, the audience enjoyed and was engaged throughout the event.

During the session on “The Future of Ship Finance, ” Robert Burke, CEO of Ridgebury Tankers, confronted the notion that shipping companies which are backed by private equity groups lack in traditional and sound shipping experience at the top management levels.  Such heated debate continued during the session on “Global Update on Chartering and S&P Markets, ” with Simon Ward, Director of URSA Shipbrokers, taking exception to a comment from the audience on the undue influence of a perceived “shipbrokers fraternity.”

In a session on ”Innovation in Networks in the Maritime Industry, ” Zacharias Siokouros, President Maritime Institute of Eastern Mediterranean, was quite candid in his remarks on what he considers the meaning of innovation – “converting ideas into invoices.”  “Without turning your ideas into something tangible, it is meaningless, ” said Siokouros. 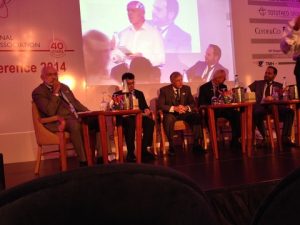 The last panel on “Excelling in Shipping Services; the name of the game” with John Faraclas (moderator) and panellists Antonios Taliotis from Deloitte, Joe Hughes CEO The American Club and SCB, Dimitris Theodorou from Svitzer Salvage and Socrates Theodossiou from Tototheo Group

The conference concluded with the panelists of the final session, “Excelling in Shipping Services; the name of the game!” all in agreement that service is the DNA of shipping.

This 34th WISTA International AGM & Conference exceeded all expectations for networking opportunities and social activities, with the welcome reception taking place at Crystal Lounge at the beautiful Limassol Marina and the Gala Event held in the Richard & Berengaria Ballroom at the Carob Mill.

Angie Redhead, Liverpool Cruise Terminal’s manager won the WISTA International Personality of the Year Award.  Angie said:  “I am extremely honoured, humbled and flattered to be named winner.  There are exciting times ahead for the port in Liverpool and I hope that winning this award will raise the profile of genuine opportunities for young people and women in this demanding but very exciting work environment.”

The Women’s International Shipping & Trading Association (WISTA) is an international organization for women in management positions involved in the maritime transportation business and related trades worldwide. WISTA is a major player in attracting more women to the industry and in supporting women in management positions.  With networking, education and mentoring as our focus, we can enhance members’ competence and empower career success.  Today there are 34 country National WISTA Associations with nearly 2, 000 members worldwide.

For more information about WISTA go to www.wista.net

N.B.: We are more than honoured and proud that in our last panel our John Faraclas moderated same and all agreed that Services is the DNA of  Shipping!