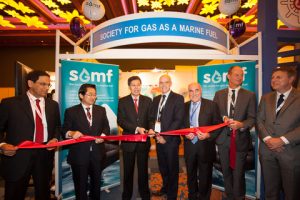 International Bunkering Conference and Exhibition (SIBCON) 2014. 1, 600 delegates  from over 50 countries attended the event’s opening ceremony, which was organised by the Maritime and Port Authority of Singapore (MPA).

SGMF’s Global Launch took place on Stand Number 33 at 10.15am. Mark Bell, General Manager of SGMF, thanked the Minister in person for his attendance and for his participation with launching SGMF. Mr Bell then continued to highlight the aims andobjectives of SGMF and the valuable work that it is doing in connection with its various members. Minister Lui Tuck Yew then cut the official ribbon, thus declaring SGMF to be launched and was presented a crystal trophy by Mark Bell. SGMF’s Board of Directors were also present for the photo opportunity which followed.

Minister Lui Tuck Yew, had mentioned SGMF previously in his opening speech to the delegates of SIBCON. Addressing an international audience during the opening ceremony, Minister Lui said that the bunkering industry had to grapple with a rather challenging environment. In the face of these challenges, we must look towards the
adoption of new technologies and new modes of operation, and seek to transform the bunkering industry such that we can ensure continued growth in a sustainable manner.