Chester and its canals…

As we said in one of our recent (24 Oct. 2014) Shipping Market recapitulations “… the tip for your holidays is the City of Chester” and we made it for the Halloween Weekend.

Rich in history, Chester, one of Britain’s Heritage Cities, offers the tranquillity and uniqueness few places on earth posses. We visited the most complete City Walls in Britain dating since the Romans where here 2, 000 ago. Dewa, as Chester was then known, was going to become the capital instead of Londinium had the Romans conquered Scotland.  Unique as a market place with a 700 years old Row shopping galleries;  well preserved 10 centuries-old Cathedral with the finest carvings in Europe since medieval times and excellent vitrails  (stained glass) with war and maritime themes amongst the Saints… The old Roman port too, one of the biggest of its times, is now a racecourse… 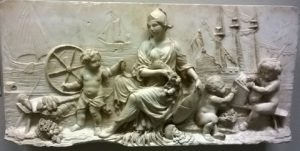 Moreover the Grosvenor Museum and the Town Hall were more than unique; history at its best. As the World Travel Market has opened today at London’s Excel Centre, I am sure you will visit the British Pavilion and for sure come across Chester; make it a promise and pay a visit; you will have the time of your life! The inland waterways and canals a must to promote for maritime tourism!

Nothing has changed for 26 years since I first visited the City of Chester from neighbouring Ellesmere Port when on a ship expedition, except maintenance and improvements; this is what I call respect to tradition and environment.

Viewers can watch herebelow  a short video taken by Anny Zade of Allaboutshipping at the North Gate Gaol and the Bridge of Sighs, which was both a defensive gateway and the city gaol, protecting the city from threats within and without.