Port of Southampton ready to handle the world’s biggest ships 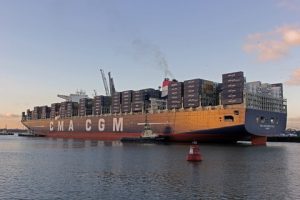 Associated British Ports’ Port of Southampton is ready to handle the biggest ships in the world today and long into the future after a £40million dredging project.

Dredgers have completed a programme of capital dredging to deepen and widen the approach channel linking international shipping lanes to the Port.

The work ensures ships with a draught of up to 15.5m – the biggest container vessels currently in service – will be able to access the Port’s container terminal.

The dredging is the final piece of the project to enhance capability at the container terminal that is operated by DP World. The SCT 5 berth has a 500m long deep-water quay and is purpose built to cater for the largest ships in the world. As well as deep-water access, it is also equipped with the latest cranes, capable of reaching across vessels 24 containers wide.

The project benefits a wide range of commercial shipping, including those serving Marchwood Military Port and at Fawley Refinery.

More than five million cubic metres of material were removed. Where possible, alternative uses have been found for the dredged material, with some 20% being used in the construction of the new breakwater in Cowes Harbour or placed in an existing licensed aggregate site for future re-use.

As well as deepening the approach to the Port, dredging at Marchwood and near Fawley has improved navigational safety and the ability of vessels to pass in the channel.

Nick Ridehalgh, ABP Director, Southampton, said: “I am proud to say that the Port of Southampton remains able to handle any container vessel currently afloat and under construction.

“It is hugely important for our future that we are able to say this. As the trend in shipping is for ever larger vessels, it is vital if Southampton wants to remain at the forefront of the industry that the Port ensures its facilities adapt to handle them.

“The success of the Port is central to the economy of the city and the region, with the Port of Southampton supporting around 15, 000 jobs and generating around £1 billion for the economy.”

SCT 5 was opened in March this year by Olympic gold medal winning yachtsman Sir Ben Ainslie and allows Southampton to offer deep-water berths that can handle the largest ships in the world. Last month the terminal operator DP World Southampton was named Global Port Operator of the Year in industry awards.

Chris Lewis, Managing Director, DP World Southampton, said: “The main channel dredging will enable container vessels to depart the terminal at 15.5m draught which is very important to our shipping line customers where Southampton is last port of call out of Europe. Our new SCT 5 berth, which is dredged to 16m can also be further deepened to 17m to meet future demand. This means that Southampton offers the complete package – a fast, efficient and reliable service as well as world class capabilities – now and well into the future.”

· Contributes £990 million to the UK economy every year.

· Handles on average 26 million tonnes of commodities each year.