Greece’s statistics agency (EL.STAT.) released earlier today its flash GDP estimate for Q3 2014. The report contained revisions to past quarterly data in line with: (i) the implementation of the new European System of National Accounts (ESA2010); (ii) the planned revision of the benchmark year for annual national accounts (to 2010 from 2005); and (iii) the integration of new and updated data from various sources.

In line with our expectations, the new data revealed upward revisions to real GDP growth in the first two quarters of 2014, with Q3 GDP recording seasonally adjusted quarter-on-quarter growth of 0.7% and rising by 1.4% relative to the same quarter a year earlier. Overall, the real GDP grew by 0.5% in the first three quarters of the year, with the economy exiting recession (in QoQ seasonally adjusted terms) one quarter earlier (i.e., in Q1 2014) than it was believed before the past data revisions.

Interestingly, the breakdown of the revised national accounts data showed that both real private consumption and gross fixed capital formation recorded positive QoQ seasonally adjusted growth in Q2 2014, a trend that is likely to have continued in Q3.

Overall, we currently expect full-year GDP growth to reach between 0.8% and 1.0%, exceeding an official forecast of 0.6%. 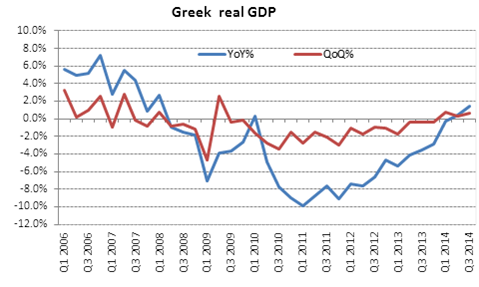