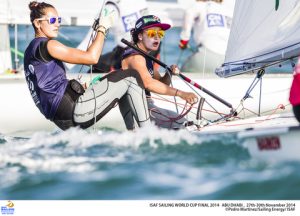 28 November 2014 – Issued on behalf of ISAF – The leaderboards across the ten Olympic and open kiteboarding event at the 2014 ISAF Sailing World Cup Final in Abu Dhabi, UAE are shaping up ahead of the penultimate day of racing.

A lighter breeze in the region of 9-12 knots with gusts up to 13 knots made for an intriguing day of racing in the Emirati capital. At the midway stage of the regatta there is minimal separation of the top racers. The level has been raised and every competitor is aiming to put in their best display as they bid to for glory and a share of the USD $200, 000 prize fund.

The waters of Abu Dhabi were blessed with the sight of 270 of the world’s finest competitors from 38 nations from 12:00 as racing commenced around Lulu Island and off the stunning Corniche.

Billy Besson and Marie Riou (FRA) held on to their Nacra 17 lead as the overnight French 1-2-3 was broken up.

Besson and Riou occupied top spot heading into the second day with compatriots Audrey Ogereau and Matthieu Vandame (FRA) following in second and Moana Vaireaux and Manon Audinet (FRA) in third. However the French dominance was shattered by Austria’s Thomas Zajac and Tanja Frank and Switzerland’s Matias Buhler and Nathalie Brugger who took a race win apiece to pile on the pressure.

“It was really difficult for us, ” said Zajac, “In fact much more difficult than yesterday as the wind was going up and down with big wind holes in the fleet. You needed a bit of luck to have a nice consistent day.”

All of the teams had a very much up and down day with consistent results at a premium. The French teams dropped down to fourth and fifth, still in the hunt and Zajac remains wary, “We haven’t broken the French dominance yet I would say. There are still some races to go but as we saw yesterday and today it won’t be easy tomorrow. We are inshore in the bay and I think it could be a difficult day tomorrow.”

The Austrians picked up the final race victory of the day, racing tactically in a 7-9 knot breeze just off Lulu Island. With just 13 points separating first to sixth the Zajac knows the next few days will be a challenge yet has one eye on picking up an Abu Dhabi medal, “We’re not going to do anything special tomorrow, just try to do the same thing we’ve been doing over the last few days by just concentrating and doing our best.

Besson and Riou have been the top performers throughout recent months and have two Nacra 17 World Championship titles to their name. The pair are always dangerous on the race track yet strive to improve and develop one race at a time.

With three races on Friday and Sunday’s Medal Race to decide the podium, Besson and Riou remain cautious, “You never know how it will go until each race has finished, ” said Besson, “We are leading now even though we had a bad day but tomorrow we’ll look to correct our mistakes.

“We have the sun and waves here in Abu Dhabi so it is great sailing conditions.”

Besson and Riou top the podium on 13 points followed by Zajac and Frank on 19 points. Buhler and Brugger complete the podium on 20 points, tied with Ogereau and Vandame.

France’s Louis Giard put in a fearless display in the Men’s RS:X to grab the lead with both hands.

The Frenchman is one of the youngest competitors in the experienced pack of elite athletes and picked up three race victories on another glamorous day in Abu Dhabi.

“It was perfect for me, ” beamed Giard ashore after racing, “I scored three bullets so it was a really good day. I made good choices. Sometimes everything goes perfectly and that was certainly the case today, it was perfect. The conditions were great, sunny, a bit of wind and I’m really enjoying this week. Tomorrow I will try to keep up with the same spirit.”

With an abundance of Olympians within the fleet the youngster certainly isn’t daunted when going up against the best of the best. Blasting his way around the race track to take three excellent victories he is showing no sign of lacking big race knowledge, “It’s sometimes a bit inconvenient when you have less experience but sometimes you just have ‘young power’ and you’re fearless.

“You feel like you have more power and it’s just about enjoying it and not allowing any extra pressure.”

The young gun has a nine point lead over ISAF Sailing World Cup Qingdao gold medallist Byron Kokkalanis (GRE). Overnight leader Pawel Tarnowski (POL) was a up and down, taking a 6-11-6 scoreline and drops to third overall.

It was another great day for Bryony Shaw (GBR) as she added two more race victories to the three she worked hard for on the opening day.

The British racer has been revelling in Abu Dhabi, enjoying the conditions and the culture, and has duly been rewarded by dominating the 18-boat fleet.

Shaw started the day with a 12th place finish, which she discards but she found rhythm in Race 5. Shaw took an early lead and rounded the first mark well ahead of the chasing pack. Hei Man Chen (HKG) looked to catch up with Shaw, progressing up from ninth to second. Unfortunately for the Hong Kong racer it was too little too late as she ended up 20 seconds shy of Shaw at the finish.

The Briton then fended off charges from Charline Picon (FRA) and Flavia Tartaglini (ITA) in the final race of the day but held strong to take her fifth race win of the regatta and with it, a healthy lead.

Shaw tops the pile on five points with Picon trailing on 21 in second. Italy’s Laura Linares is third on 28 points.

It’s tough at the top in the Women’s 470 as 2014 World and European Champions Lara Vadlau and Jolanta Ogar (AUT) finished up tied on four points with China’s Shasha Chen and Haiyan Gao after two intriguing races.

The teams shared a race victory apiece with the Austrians securing a third and the Chinese picking up an eighth in the other. Both teams discard those scores but with 11 exceptional teams in the fleet they will have to tread carefully over the final two days.

After racing Vadlau said, “It’s nice racing between the Chinese, they are really good sailors. It will be quite a nice battle between us but tomorrow we will just sail our race, do our best and then we will see.”

Sophie Weguelin and Eilidh McIntyre (GBR) are back in the boat competing for the first time since August after the former picked up deep vein thrombosis travelling back from Rio de Janeiro for the Olympic test event. The former World #1 pair, who won gold at the 2014 ISAF Sailing World Cup Miami, have taken back to racing well and occupy the final podium spot.

Mat Belcher and Will Ryan (AUS) are showing their class in the 16-boat Men’s 470. The pair enjoyed another excellent day on the water posting a third and a bullet to give them a one point lead over Japan’s Tetsuya Matsunaga and Yugo Yoshida.

The Australians have a consistent string of races under their belts whilst those around them, minus Panagiotis Mantis and Pavlos Kagialis (GRE) in fifth, count some bigger scores.

With two fleet races remaining ahead of the Medal Race, Belcher knows it will all boil down to Sunday’s judgement day, “Everyone is well aware that the Medal Race will decide it. We’re not necessarily here to win. We’re here to perform and to take each race as it comes. There are only six races so we’re just sailing as well as we can and take as much out of it as we can.”

Belcher is one of the most dominant sailors around, winning five consecutive World Championship titles, an Olympic gold at London 2012 and amassing 17 consecutive regatta victories. He has seen a lot across his many years of racing but Abu Dhabi is a first for him and he likes what he sees, “It’s an amazing place to race. It’s not every day you can race in 12 knots and be wearing lycra which is pretty cool. We came over here because we wanted a top level competition. We’ve got six of the top seven in the world and we’ve certainly got that.

“The Abu Dhabi people are really welcoming in what we’re doing and they are showing a lot of support. The weather conditions are fantastic and the racing doesn’t get much better than this. It’s fantastic, we’re really happy to be here and we’re looking forward to seeing how this event develops in the next few years.”

Twelve points separate places first to eighth so it is all to play for with two days of racing remaining.

The top spots in the 49er and the 49erFX remain the same following a solid day of racing for the overnight leaders.

Tomasz Januszewski and Jacek Nowak picked up a 2-13-1 scoreline in the 49er to maintain their advantage. Marcus Hansen and Josh Porebski (NZL) are up into second, nine points off the Polish competitors. John Pink and Stu Bithell (GBR) are one point off the Kiwis in the final podium spot.

New Zealand’s Alex Maloney and Molly Meech were near faultless in the 49erFX fleet taking a second and two race victories. As a result of their great day they have extended their lead to 11 points over Sweden’s Lisa Ericson and Hanna Klinga. Giulia Conti and Francesca Clapcich (ITA) drop to third overall.

Tom Burton and Francesco Marrai (ITA) are tied on seven points apiece in the 20-boat Laser fleet. It was an up and down day for Burton who was penalised in the opening race, subsequently receiving a scoring penalty, before he bounced back to take victory in the final race of the day.

Marrai on the other hand was a model of consistency. A pair of seconds promotes him up from 11th proving that anything can happen in the ultra-competitive Laser fleet.

Rindom stole the show by taking a race victory and a second to promote herself up the leaderboard. The days other race win went to Josefin Olsson (SWE) who is ninth overall.

Vasilij Zbogar (SLO) remains in control in the Finn fleet after he recorded a seventh and a second. He tops the billing on four points.

Croatia’s Ivan Kljakovic Gaspic took the opening race win of the day and backed it up with a fourth. He trails Zbogar by four points.

Caleb Paine (USA) performed well in the lighter breeze, bettering his opening day to push up the leaderboard. The American came through with a sixth in Race 3 and dominated Race 4, leading from the start to the finish to take the win by nine seconds over Zbogar.

The kiteboarders moved into their Round Robin heats and it went via the form book across the board.

The competitors will resume with heat racing on Saturday before the top ten boats progress to the medal stage.

Two semi-finals will be held with five racers in each. Places 1 and 2 will carry forward ten points, 3 and 4 seven points, 5 and 6 five points, 7 and 8 four points and 9 and 10 three points. Two races in each semi-final will follow with the top two placed sailors in each heading to the final.

From there, it’s a four way single race shoot out for the podium spots.

Racing is scheduled to resume at 12:00 local time in Abu Dhabi with the Medal Race places to be decided.