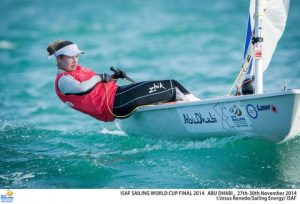 29 November 2014 – Issued on behalf of ISAF – It will be a final day shootout in the Laser and Laser Radial fleets at the 2014 ISAF Sailing World Cup Final in Abu Dhabi, United Arab Emirates.

There is minimal separation in both fleets ahead of Sunday’s double points do or die Medal Races following a thrilling penultimate day of racing. With the Medal Race places decided the competitors will be fighting it out for ISAF Sailing World Cup Final glory as well as a share of the USD$200, 000 prize money.

Abu Dhabi treated the sailors to another glamorous day with a north westerly wind coming in around 10-13 knots which made for some exciting action.

The Belgian, a London 2012 Olympic bronze medallist, and Danish racers traded blows on the penultimate day taking a win and a second apiece with minimal separation on the race track. Rindom came out flying in the opening race and took the lead from the start and she never looked back, sealing the deal by over 30 seconds over Van Acker.

Van Acker was dominant in the second race of the day, demonstrating exceptional downwind speed throughout to pull away from the pack.

As it stands Van Acker holds the lead on 11 points with Rindom on 12. Tuula Tenkanen (FIN) and Alison Young (GBR) are in the hunt behind the leading pair on 22 points but will likely fight their own battle on the final day.

“Wow, what a really nice day, ” beamed Van Acker after racing. “I really wasn’t expecting this when coming to Abu Dhabi so yea, wow. It was a really nice day, really fun sailing with really big waves, nice breeze and how it should be every day.

“For me it was a good day. I was second in the first race but it didn’t go so well. I was lucky to be really fast on the downwind so that made me some gains. In the second race I was good from the beginning and got the lead and kept on extending it. I am really happy.”

Rindom was quick to echo her rivals thoughts on the days racing, “I like the weather, it’s so much better than Denmark at this time of year, ” smiled Rindom, “I actually thought there was going to be no wind here but the conditions are so good.

“It was a brilliant day, I love the conditions and we had two good races which were done really fast by the Race Committee and the wind was perfect.”

The level of competition in the Laser Radial fleet has been exceptional. World Champions in their numbers have battled it out over three days and now it all comes down to Sunday’s Medal Race.

With double points on offer the game is wide open and Van Acker knows it’s going to be tough, “I think I will just sail my own race. It’s one point so you can’t really do a lot. It’s also quite close behind us so it’s not like we have a 20 point lead over the rest. It will be really tricky and on the inside course [just off the Corniche] it will be really hard but I’m happy with my day and hoping to continue that tomorrow.”

Rindom also remains wary, playing down her chances, “I don’t know how I’ll go into tomorrow yet, I have to go home and figure out what the points are. I can imagine there are some girls behind going for the win so we will just have to see.”

World #1 Tom Burton and Matt Wearn are flying the Australian flag high in the Laser fleet at the ISAF Sailing World Cup Final in Abu Dhabi, UAE, occupying the top two spots in the ultra-competitive fleet.

Burton has been the standout performer of the week, recording three victories from six races. He leads on 11 points but his young compatriot, training partner, room-mate and rival Wearn piled on the pressure with an outstanding day on the water to pull within nine points.

Burton secured the opening race victory over Wearn by the narrowest of margins. Although Burton’s lead seemed comfortable at the midway point of the race Wearn pushed hard to reduce the margin to two seconds at the final mark. Burton managed to hold on, narrowly, to take a slender victory.

Wearn ramped things up in the final race ahead of Sunday’s deciding Medal Race and picked up an emphatic race win, finishing 60 seconds ahead of Jesper Stalheim (SWE). The result pulled the young Australian within reach of Burton and he was a happy sailor at the close of play, “I finally found some form, ” smiled Wearn. “I definitely needed it to get into that area to try and push for the top three. It’s a bit of a shock to be up in second to be honest as the racing has just been so close in the Laser.

“With just 20 boats and one dropped score after six races anything can happen. But that’s the way it is.”

Burton and Wearn are sharing a room in Abu Dhabi and it will be a case of ‘what goes on, on the race track, stays on the race track’ on the final day. “I’m sure we’ll have a good time tonight, ” joked Burton. “There will be a bit of banter and stuff like that but it’s good to see an Australian one two.”

“Matt and I train together a lot. I competed against [Tom] Slingsby in the regatta before he won the Olympic gold and I know how good a feeling it was for me to be just behind him. We train together so this will make for some good memories when we train this Australian summer.”

Medal racing in a highlight competitive fleet is nothing new to Burton who has made the cut in all events he’s competed at throughout 2014, picking up an abundance of medals along the way. For Wearn he has not faced off against all of the best Laser sailors in the world but goes in with no fear, “Tom’s got a bit more experience than me in Medal Race situations but I think I’ll go out there and just go for it. If I can win the race then anything can happen.

“It would be pretty big to finish on the podium. I had a bad regatta at the worlds so to get the confidence back up and get back into the groove of the Laser class would be really good.”

An Australian one two is certainly on the cards but Tonci Stipanovic (CRO), Francesco Marrai (ITA) and Jean Baptiste Bernaz (FRA) are all within touching distance. Nonetheless the ever confident Burton remains upbeat, “Depending on what the conditions are we will see what we can do. I’ll see what the conditions are like tomorrow. I think that maybe there will be some more breeze and inside here [just off of the Corniche] it should be interesting.”

Racing is scheduled to commence at 10:00 local time on Sunday 30 November.