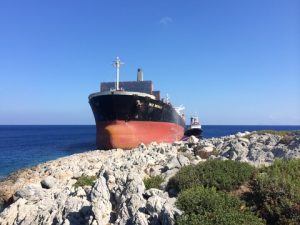 On the 5th September 2014, container vessel “CRILLON” (24, 300 DWT, 16, 700 GRT), partly laden with containers, immobilized about 100 miles south of Limassol, Cyprus.  TSAVLIRIS dispatched T/B PEGASUS (332 GT, 35 BP) from Limassol together with two in-house technicians.  The casualty was towed from her position to Limassol for repairs and subsequently berthed on 14th September when services terminated. 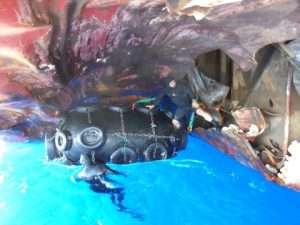 INCE INEBOLU: A view of the damage

On 5 Sept, bulk carrier “INCE INEBOLU” (30, 010 GRT, 52, 380 DWT) in ballast, with about 1, 500 tons of bunkers on board, grounded on rocks at south-eastern Astypalaia Island, Aegean Sea, Greece during a voyage, from Hodeidah, Yemen to Novorossiysk, Russia.

On the 6th September, members of the team commenced inspection on board the casualty, whilst divers assessed the underwater damage.  The grounding had caused significant indentations, cracks and had ripped the plating from the forward end of the bulbous bow up to midway through cargo hold no 1, flooding it in the process. Moreover, rocks penetrated the forward part of the same hold’s tanktop.

Following the transfer of roughly 800m/t of bunkers from fuel oil tanks (FOT) numbers 1 and 5, to FOT number 3 (centre) and 4 (port side), the deballasting of 2000 m/t from double bottom tank number 2 (port side) and the pumping out of 500m/t of seawater from cargo hold 1, the casualty was trimmed about 8 metres by the stern and subsequently refloated.

Temporary repairs were carried out to the tank top of cargo hold 1 and a yokohama fender (protected by tyres) was wedged/secured in front of the collision bulkhead.

The casualty remained off Astypalaia, with the “MEGAS ALEXANDROS” standing by from 11th September to 1st October, for surveys, Port State Control formalities and weather abatement.  The night of 1st October anchor dragged during prevailing gale force winds.  On 2nd October the casualty was escorted to Neorion Shipyard, Ermoupolis, Syros Island where redelivery took place after all portable salvage and towage equipment onboard was removed.

The salvage service, lasting about 4 weeks overall was entirely successful.

Tsavliris Principal certified as Mediator in Greece and the UK

Mr George  A. Tsavliris, a strong supporter of lifelong learning, was certified as a Mediator by the Greek Ministry of Justice, Transparency and Human Rights in September 2014.

This follows on from Mr Tsavliris’ successful completion of the Civil and Commercial Mediator Programme with ADR Group (Alternative Dispute Resolution) in London 2009. He holds the title of an ADR Group Accredited Mediator and is specialized in the ADR, conflict and crisis management & prevention field.

Mr Tsavliris is also a member of EMMA (Eastern Mediterranean Mediation Association) since 2009.