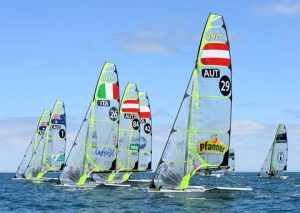 Port Phillip is so vast and empty midweek the fleets are well separated. Plenty of room to swing a cat as the saying goes. Other than the on-water race officials’ and coaches vessels there are no other power boats and equally no wash interfering with the fleets. A clear, clean and fair track for the 504 boats and 800 or so competitors from around the world.

It’s noticeably quiet inside the course boundaries too, the occasional polite reminder indicative of the opening light conditions and early stage of competition.

Ashore a corresponding chilled out and friendly vibe is noticeable around the SYC boatyard. Results are already adding up to determine who goes through to the weekend Medal Races, but there’s time in this first phase for conviviality and to joke around.

The best placed European 49er crew is Austria’s Nico Delle-Karth and Nikolaus Resch in third overall behind the two Australian teams of Nathan Outteridge and Iain Jensen and David Gilmour and Rhys Mara in second place.

“Bloody Nathan… he hasn’t had a bad race yet, but I hope he does soon!” Gilmour jested this afternoon, a backhanded compliment directed at his fellow Australian Sailing Team (AST) member and crew, London 2012 49er Olympic medallists and now part of the Artemis America’s Cup team.

The partnership between the two Nicos spans 15 years and “is a mixture between us being brothers and a married couple, ” says the bow. “We always argue, that’s what keeps the relationship alive, ” says the aft.

There’s not much the guys don’t know about each other. The most annoying thing about Resch is “how he leaves his stuff all over the boat, ” says the skipper pointing towards Resch’s rashie drying on the wing in the sun. On the flipside Resch grizzles, “Nico always likes a clean boat.” Sounds like a case of opposites attract.

As 19 and 20 year-olds the duo went to the Athens Olympics, a career highlight for Delle-Karth whereas Resch cites the youth worlds in Sydney in 2000 straight after the Games that year as his high point. Now they are aiming towards the Rio Olympics in two years’ time with the goal of a podium finish. “We finished fourth at London, we at least want third in Rio, ” Delle-Karth puts out there.

Six races down and Norway’s Helene Naess and Marie Ronningen are second to Tess Lloyd and Caitlin Elks (AUS/ASS) in the 49erFX women’s skiff. The Norwegians are showing early fleet control with twins Ragna and Maia Agerup holding onto third place.

Naess and Ronningen have swapped snow and ice on the water to train and squeeze in some kiting and surfing in Australia for the past five weeks. Like any two person sport, communication is key and after two years together there’s a good understanding between the teammates. They focus on staying calm and the division of roles on the boat Naess suggesting, “It’s better to talk too much than not enough.”

Ronningen recently added up the number of days they spend away from home in a typical year and the figure came to 200. So how do they hold down relationships? “It’s easier to stay single, ” they agree. Next stop after Melbourne is home for a white Christmas then onto Miami for the second stage of the ISAF Sailing World Cup series.

Two races in, Singapore’s Colin Cheng and Australia’s Tom Burton are tied on four points with the Australian Sailing Team’s Burton, currently ranked first in the world, second on a countback.

“I’ve had a good start, the fleet here is probably the hottest in the world right now, ” acknowledged Cheng. He found conditions tough today, but to his liking, “The pressure was up and down and the wind left and right…I do like that sort of tricky weather.”

Cheng lives in Australia and is three years into a Bachelor of Science and Nanotechnology degree. He’s opted to take a year off from his study to “train hard and give the Olympics a good shot”. On the sport he’s been part of since age seven when his dad introduced him he adds, “I like the recreational and competitive side. Sailing is one of the most complex sports in the world. I’ve been doing it for 17 years and I’m still learning all the time.”

A clean start for Alison Young (GBR) in race one set the 2012 London Olympic Games competitor up for a solid win on the first day of competition in the Laser Radial.

A start line battle between world number three Tatiana Drozdovskaya (BLR) and Christine Neville (USA) allowed other top contenders to slip through and take the lead early on, and cost Drozdovskaya precious places. By the second race the Belarussian had regained her focus and stormed into first place.

The breeze freshening to 16 knots for the afternoon session was ideal for the Finns. Ed Wright (GBR) showed the Aussies how it’s done, scoring two bullets straight up on day one of their Melbourne campaign. Jake Lilley (AUS/ASS) and Oli Tweddell (AUS) are second and third, one point apart.

The fleet hit the water for the early afternoon session with three races completed in the 8-12 knot southerly breeze.

Racing was tight across the leading three. In first place after six races and with their only second place as a drop, Jason Waterhouse and Lisa Darmanin (AUS/AST) are holding onto their overall lead from Darren Bundock and Nina Curtis (AUS/AST).

Bundock and Curtis found themselves in sync to comfortably win the second race which ensured they kept Euan McNicol and Lucinda Whitty (AUS) at bay and in third overall.

Waterhouse came off the water delighted with their results, “We had to fight for our results today which made it fun. The lead was constantly shifting in each race.”

Dan Fitzgibbon and Liesl Tesch, both AST, are back together at the ISAF Sailing World Cup Melbourne for the first time since winning gold at the Paralympic Games in 2012 and their first IFDS World Championship title in Halifax, Canada in August. The successful partnership produced two wins on day one to be leading the pointscore with a long way to go.

And with Williamstown hosting the 2015 IFDS Sailing World Championships, Tesch is excited to be back home, “It’s fantastic to be back at Melbourne and racing together with Dan on home waters after quite a long break. It’s beautiful out there on the waves of Port Phillip and I can’t wait to get out there for more racing.”

Peter Thompson, the NSW sheep farmer, and Matt Bugg (AST) from Canberra are this evening sitting on equal points in first and second places in the 2.4mR Paralympic one person keelboat, a scaled down version of an old 12m America’s Cup yacht.

Stefania Elfutina (RUS) continued her winning ways with two seconds and a first in the building afternoon breeze to give her a comfortable first place overall after six races.

After a difficult first yesterday, Monday December 8, 2014 with an OCS and equipment dramas, Joanna Sterling (AUS) has moved up to second thanks to a stronger performance, including a first place in the last race. In equal second place is Maria Aadland Mollestad (NOR).

Juozas Bernotas (LTU) stepped up a grade in the stronger southerly to take out three first places, which has put him in first place overall. The lighter Evgeny Ayvazyan (RUS) suffered in the stronger conditions to slip down to second overall. In third and with a better performance today with three second places was Dmitrii Polishchuk (RUS).

There were only two races for the fleet today. Alexander Conway and twin brother Patrick (AUS) took out both of them, but not without being pushed by the nine-boat fleet.

“We got off the starts fairly cleanly and managed to hold the fleet off. The second race was a bit harder as the fleet kept splitting. We had to work a lot harder for the second one, for sure, ” Alexander said.

In second overall after a second and a third today is Antonio Rosa and Joao Rosa (POR) with third place overall going to Angus Galloway and Joshua Dawson (AUS).

“What am I doing here?” was the first reaction from dual-Olympian and stand-in helm Jeni Lidgett-Danks (AUS) as she reviewed her first day of racing for quite some time. She has stepped in to help out a friend and keep crew Jaime Ryan on the water while her regular skipper, Carrie Smith, recovers from illness.

They had a good battle in the two-boat fleet and finished in second place to Sasha Ryan and Amelia Catt (AUS).

Up to twenty 2015 ISAF Sailing World Cup Final spots are available in Melbourne, the first stop of the 2015 series.