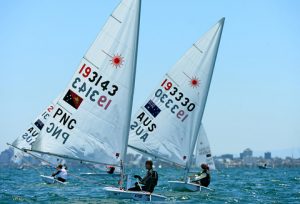 “The team has done a few international events, but not as many we would like. In the last four years they have done about one a year. It’s not enough. They really need to do a dozen a year or at least half a dozen a year, ” Numa said.

Rose-Lee Numa is the exception having competed at the Laser Radial Youth World Championships in 2012. She then went on to participate in ISAF’s Emerging Nations program in 2013 and 2014, aimed at assisting promising sailors from small nations who don’t have the funding or support they require. Rose-Lee then went on to compete at the ISAF Sailing World Championship in Santander.

This week the PNG Laser and Laser Radial sailors are coming to terms with Port Phillip’s winds, current, and the cool summer temperatures early in the week. “The cold is getting to us. One of the girls has picked up the flu and was struggling out there on the first day. But if the wind picks up and the sun comes out then it will be better for them, ” Numa added.

Light winds opened the week and yesterday winds gusting to 30 knots and steep seas pared back the schedule. Today it’s a pleasant 25 degrees in Melbourne and winds are SE 14 knots, stronger offshore. 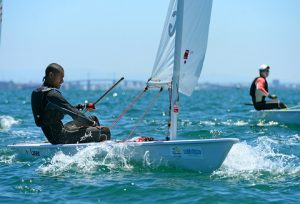 Due to PNG hosting the 2015 Pacific Games, the squad is being sponsored through the PNG Olympic Committee with government funding. “Twenty-two countries get together once every four years for the Pacific Games, almost like a mini-Olympics. Sailing is part of that event, ” explains Numa. “The government is funding the training and development programs for all the PNG athletes taking part in the Games.”

On his return home the team coach will apply for another round of funding hoping to use the financial support to set up a training camp for the squad in Sydney. If the funding comes through he will send the squad back to Australia to work with Laura Baldwin, Britain’s Laser Radial representative at the 2004 Olympic Games and full-time coach since 2009. “We want to do the program with her and then go onto racing in Sail Brisbane, which is a similar size fleet to here.”

Racing continues today for the Laser and Laser Radial classes ahead of the Sunday’s Medal races.

ISAF is made up of 140 Member National Authorities (MNAs), who are its principal members