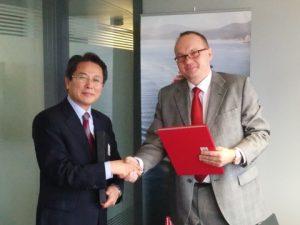 Korean Register (KR)  – an IACS member classification society – announces that it has signed an MOU governing the delegation of statutory certification services for vessels registered in the Grand-Duchy of Luxembourg. KR is now fully authorized by the Government of Luxembourg to deliver “statutory services” and is Luxembourg’s 7th Recognized Organization (RO).

KR has continuously endeavoured to expand its services to governments across the globe by acquiring authorization to deliver statutory services. This new signing brings the total number of countries where KR is authorized to carry out ship survey and certification work to 68.

The Korean Register is an IACS member classification society established in 1960 with the purpose of promoting safety of life, property and the protection of the marine environment.