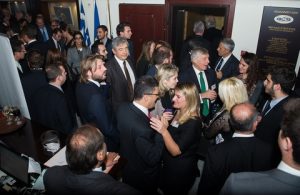 Guests at the Piraeus Marine Club

The American Club hosted over 200 guests at the Piraeus Marine Club this past Tuesday December 9th, all of whom came to hear the latest news and developments of the Club at the traditional December pre-Christmas gathering.  Joe Hughes, Chairman and CEO of SCB, Inc., Managers of the American P&I Club led the audience through the latest vital statistics of the Club as well as Eagle Ocean Marine, the fixed P&I facility of the American Club and managed by Eagle Ocean Agencies, which is part of the management group.  George Tsimis, Senior Vice President, Claims Director and General Counsel then followed with the highlights of claims incidents for 2014 as well as loss prevention initiatives. 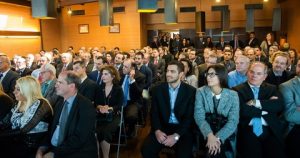 View of the Audience

Dorothea Ioannou, Managing Director of the Managers Piraeus Liaison Office gave an update on status of the Piraeus office, providing the backgrounds on the qualifications, experience and capabilities of the claims executives which service the region.  The presentation was concluded by Vincent Solarino, President and COO of the managers of the Club, who thanked the Greek membership and expressed his admiration of Greece, in particular the Greek shipping community’s ability to stand and thrive despite adversity and enthusiastically confirmed the Club’s and the Manager’s wish to continue to be an active supportive partner. 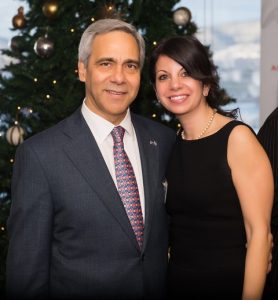 The American Club was founded in February 1917. In addition to its US headquarters in New York, the club is able to provide local service across all time zones, communicating in 11 languages, with subsidiary offices in London, Piraeus, Shanghai and Hong Kong and a worldwide network of correspondents.