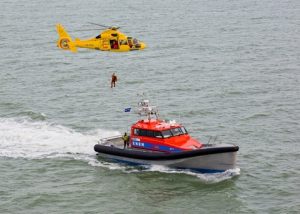 “We are proud to have been associated with this revolutionary vessel, ” said Ross. “The Nh1816 is the first in a series of next generation SAR 1906 vessels Damen has delivered to KNRM and rightly seen as the most advanced all-weather, self-righting search and rescue boat in the world.”

Ross explained that Servowatch Systems has been involved in the project from the outset as KNRM required a vessel with an “exceptionally high level” of automation and systems integration.

“We were able to meet the requirement with our turnkey ServoFusion solution, ” said Ross. “Extensive integration has enabled KNRM to analyse all the data from various systems, including propulsion plant, auxiliary machinery, electrical systems, communication and navigation systems, HVAC and all safety and security management platforms. The integration of all components like this provides a means of real-time data exchange for ship-to-shore communications, which is sacrosanct to the success of any SAR operation.”

Gerard Burema, KNRM’s Head of Strategy & Innovation, said; “Servowatch listened to our dreams and visions and brought them to reality. The Servowatch Integrated Platform Management System (IPMS) has elevated our SAR vessel into a new dimension, where information technology not only helps the crew operating the vessel, but also supports them with their main assigned task – searching and rescuing people.”

KNRM’s next-genre ration lifeboat is a 35 knot self-righting search and rescue vessel with an aluminium hull and composite wheelhouse with capacity for 125 persons. The hull design is based on the Sea Axe bow, a hull form pioneered by Damen Shipyards Group,  Delft University and Marin, and adapted for lifeboat operations.

The vessel was delivered in April 2014 following the success of North Sea seatrials in January, where the test crew confirmed that the vessel outperformed her predecessor, the Arie Visser class.

Nh1816 will showcase its new vessel and technologies in January when it will make way across the North Sea to attend a media event in Heybridge.

Originally established as Bond Instrumentation & Process Controls in 1975, the company evolved from its service and support roots with the UK Ministry of Defence into a major award-winning manufacturer of ship control and alarm monitoring systems for the global maritime industries, achieving a number of significant contracts.

With strong financial backing and renowned for its investment in product development, Servowatch is expected to see exponential growth across all marine segments.