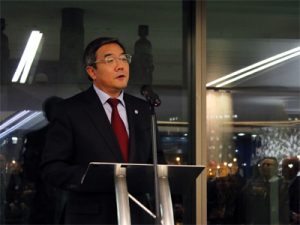 IMO Secretary-General Sekimizu spoke about the World Maritime Day theme for 2015 – “Maritime education and training” – at a reception for delegates to the PPR Sub-Committee (on 19 January). He said that the theme provided an opportunity to encourage seafaring as a career for young people and to promote awareness of the maritime sector to the general public. This year would also see an emphasis on renewed support for IMO’s World Maritime University (WMU), which moves to new premises in Malmö, Sweden, in May.​​