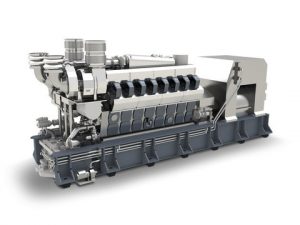 MAN Diesel & Turbo has announced the launch of its PA6 B Offshore GenSet (OG). Aimed at the offshore-drilling segment, the new engine is specifically targeted at semi-submersible drilling rigs.

The PA6 B is a four-stroke, medium-speed engine built at MAN Diesel & Turbo’s St. Nazaire, France facility from where the company has successfully sold the engine for many years. St. Nazaire will assemble individual PA6 B OG units together with an alternator in constructing the new, offshore GenSets. Typically, 8 × 16PA6 B OG units are installed aboard a semisubmersible both for main and emergency power supply.

PA6 B background
Originally developed in the 1960s, the PA6 B is a highly reliable engine whose basic design has proven itself over innumerable running hours, as well as in starting and loading sequences. Continuously developed and improved since its inception, the PA6 B has set the benchmark in many of its segments, being especially recognised within such applications as diesel-electric propulsion for commercial and military vessels, and emergency gensets in nuclear power plants, as well as other, offshore segments. Currently, more than 1, 000 engines of the PA class are in service globally.

In developing the new OG-variant, the original PA6 B engine has been much adapted to meet current market demands. One major innovation has been on the emissions front with the result that the PA6 B OG is now Tier II-compliant and can also meet Tier III regulations with the SCR (Selective Catalytic Reduction) technique. Another key development is that the PA6 B OG now employs SaCoSone, MAN Diesel & Turbo’s proven engine-safety-and-control system, while the range of turbochargers suitable for operation with the new engine has accordingly been updated.

Qualified for offshore
The PA6 B OG is a compact, lightweight, and robust powerhouse with remarkably low noise-emissions and vibrations. Its power range from 4, 440 to 7, 400 kW makes it eminently suitable for diesel-electric propulsion and power generation in the offshore segment.

The PA6 B engine is highly resistant to shock and the offshore GenSet can deal with tilts of up to 25° in any direction. Its ability to handle transient load increases and long-term, low-load operation are also noteworthy, while its proven design and the use of high-class OEM components facilitate long maintenance intervals.