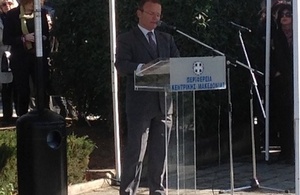 Ambassador John Kittmer was the keynote speaker at the commemoration event in Thessaloniki, Greece. “Through our words of humility we must educate and commemorate”

The British Embassy co-organised with the Jewish Community in Thessaloniki a series of events in memory of the Jews of Thessaloniki victims and survivors of the Holocaust, on 24 January 2015. The events were under the auspices of the UK International Holocaust Remembrance Alliance (IHRA) Chairmanship which the UK assumed in February 2014.

The Ambassador’s speech can be viewed in the pdf herebelow: