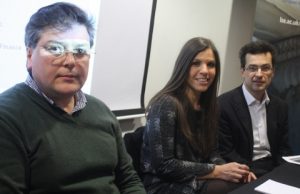 Do not under-estimate the rise of the extreme right in Greece, audience at LSE Hellenic Observatory meeting is urged

Greece has seen a continuing upsurge of extreme right-wing forces at the same time as it has elected a left-led government, speakers cautioned during a debate organised by the Hellenic Observatory, a leading research centre at the London School of Economics.

The meeting heard of the resilience of neo-fascist Golden Dawn party despite its allegedly illegal activities. The party came third in the January 25 2015 elections with nearly 6.3% of the vote.

Dionyssis G Dimitrakopoulos, senior lecturer in politics at Birkbeck College, University of London, said that while the leftist Syriza party was a clear winner, Greece had again opted for coalition government, which was a healthy outcome. It was also clear that “Golden Dawn is here to stay.”

He said that it was very sad that the populist Anel or Independent Greeks were in power as a coalition partner “but that is the way the Greek people have voted.”

The election had confirmed the slump in support for the traditional socialist party Pasok, and “whether this revolution will be mirrored by a similar revolution on the centre-right remains to be seen.”

He set the Greek poll in the context of the European Union squeeze on the country: “What is the point of having elections if the only voters to make a difference are the German voters?” He warned of a toxic atmosphere developing and added: “I wonder how many of the German people know that four-fifths of the bail-out fund goes to French and German banks.”

Greeks had every right to draw attention to their needs, but Dr Dimitrakopoulos said that similar change in Spain, where a new left-wing party named Podemos is gaining ground, would be a bigger blow than that of Syriza to the ruling forces in the EU.

Daphne Halikiopoulou, lecturer in comparative politics at Reading University, said that Greece’s debt commitments were huge, and the rate of unemployment was the highest in the EU, with almost 60% of the youth jobless. The economic crisis translated into a massive crisis of governance, of institutions.  People simply did not believe the government could provide stability and be effective in dealing with the economic problems. The people questioned the ability of the state to deliver on the social contract.

Everybody was focusing on the question of the radical left and people were talking less about the extreme right Golden Dawn, said Dr Halikiopoulou. The previous day a court had ruled that the leader of Golden Dawn, Nikos Michaloliakos, and more than 70 party members including all 18 of the party’s MPs in the previous parliament, be indicted for murder. [Golden Dawn denies any involvement in violent activities and rejects such charges]

Dr Halikiopoulou said that Golden Dawn started in the fringes of the system and in May 2012 polled 6.9% of the vote. Now after all the allegations of violence, it still managed to get 6.28% and 17 seats in the new parliament.

She said that if you add the Golden Dawn vote total to that of Anel and a percentage of New Democracy voters who agreed with some of their ideas, there was a noticeable far-right presence. By contrast, in other countries with severe economic difficulties – Portugal, Ireland, and Spain – there had not been a big far-right trend. The situation depended of the ability of the state to manage the crisis.

She said that the dramatic decline of Pasok and reduced support for New Democracy – two parties which led governments in recent years – had been accompanied by the rise of the radical left, Syriza. “Perhaps the two-party system is slowly returning, with Syriza taking the place of Pasok.”

Syriza was able to aggregate voters from many sources that were largely dissimilar, even from Golden Dawn. It managed to get a lot of voters from across the political spectrum. Its electoral base included the unemployed, public sector workers and a large percentage of private sector workers. “It attracted the middle class” and won over “the comfortable pensioners who lost their pensions, the small shopowners who had to close their shops, the home-owners who lost the value of their homes. Will Syriza be able to maintain the radical left ideologies but appeal to the middle class simultaneously?”

Ms Halikiopoulou said that the alliance with the right-wing Independent Greeks in government was a strategic move to appeal to the middle ground.

Dimitri Vayanos, professor of finance and head of the department of finance at LSE, referred to what he called successes and failures of the bail-out.  Successes included Greece remaining in the eurozone, recapitalisation of the banks, elimination of primary trade deficits, and structural reforms.  Greece had moved to position number 61 in the World Bank Doing Business report of 2014 measuring regulations that enhance business activity, after being ranked 109 in 2009. Failures were led by a large contraction in gross domestic product, a rise in unemployment and a sharp drop in investment – “there is very little investment happening right now in Greece, ” said Prof Vayanos. There had been limited reforms in the public sector.

Steps seen as desirable by Prof Vayanos included reduced state intervention in the economy, improved accountability in the public sector, and making the public sector more independent from politicians. These were reforms necessary for long term membership of the eurozone.  There was a big institutional gap, he insisted, between Greece and northern European nations.

National debt was 177% of gross domestic product. The solution was to reduce the debt burden by extending maturities or official lenders agreeing to future debt relief if commitment to reform continued. EU structured debt could be dealt with gradually and conditionally on reform milestones. “The main problem is a lack of reforms, and NOT debts, ” said Prof Vayanos. “Statist, anti-market agendas are the exact opposite of what is needed. Statism – state intervention in the economy – creates incentives for corruption.”

The event, chaired by Kevin Featherstone, director of the Hellenic Observatory, had to be organised in a larger lecture theatre than originally planned because of intense interest in the Greek situation from lecturers, researchers and students at the LSE, Imperial College, and other institutions. The audience totalled some 200 people.

Prof Featherstone said that the elections were seen as a huge protest against austerity, but opinion polls continued to show that the majority of Greeks wished to remain in the eurozone. Greek finance minister Yanis Varoufakis had just met his German counterpart Wolfgang Schäuble and this added to the sense of drama.

TRITON, the tug and his friends the boats…