TRITON, the tug and his friends the boats… 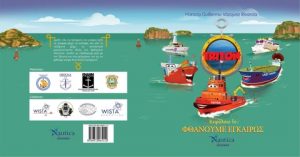 TRITON, the tug and his friends the boats. by Horacio-Guillermo Vázquez Rivarola. Nautica Ediciones, Buenos Aires. 2014.

This children’s book has been specially designed to arouse interest in the maritime activity  in a funny and attractive way.

The author gathered a group of 10 professionals (educational psychology and maritime consultants, illustrators, translators) to create this project designed for children between 5 and 9 years old.

The TRITON project includes children’s books in several chapters, cartoon episodes and a website with playground. It is available in English, Spanish, Russian and German, soon will be in Arabic, French and Chinese, and now, in GREEK.

The first part of the project (Episode 1 “We made it on time”, animated presentation and website) has been presented in London, Liverpool, La Coruña, Limassol, Dubai and Buenos Aires, and soon will be in Lima and New York. See:

This new greek version, is dedicated for all the greek-speaking childrens, “Sons of Poseidón”, but it is also a tribute to Greek Culture, who gave to the whole wold its invaluable legacy. It is the reason why the principal characters are named as Greek sea-deities: Triton and Cibeles.

The first versions of the book has been sponsored by professional maritime associations of Argentina (Merchant Engineers and Radiooperators); Medical Assistance of Pursers Officers and the National Merchant Marine School of Perú with the collaboration of the National Nautical School of Argentina; Technical Superior School of Nautical and Engineers of La Coruña, Spain, WISTA-Argentina and WISTA-UK.

About the author: Horacio-Guillermo Vázquez Rivarola. Merchant Marine Officer. Professor in the Argentine Nautical School. Master in Sciences and PhD (University of Vigo, Spain. Thesis: Corporative Identity of the Merchant Marine). 24 books published in Argentina and Spain. Personality of the Year 2014 (WISTA-Argentina). Associated Fellow of the Nautical Institute (London).

Collapsed shipping markets with the BDI at 559 points!