HESGB 20th Anniversary Dinner and Dance: more than a success!

With over 600 of the faithful – a record attendance – members, guests, sponsors and supporters at the 20thAnniversary of the Hellenic Engineers Society of Great Britain Annual Dinner and Dance had one of the best times of their lives last Saturday night! Anny Zade writes:

A full house at the famous Hilton on Park Lane in the British capital – as well as the administrative capital of world shipping and trading – enjoyed this great get-together meticulously organised over the last three years by the society president Dimitris Monioudis and his wife Camila as well as by all the members of the governing committee in London, Athens and Limassol!

From the drinks reception networking …extravaganza!

Participants and supporters from all five continents – 30 nationalities – celebrated until the early hours of Sunday this HESGB Anniversary which was also one of the most immediately circulated hits, as it was unfolding live into Facebook and other media networking means.

Last year’s event  become the preamble of this year’s success and despite the current world shipping slump, cargoes have to move, ships have to be repaired and maintained, built or converted; the environment has to be protected; security must be effective, health and safety too, the human factor must be well educated and trained and the regulatory, accounting, financial and legal issues all in order. Did I hear you say flags, maritime tourism, academia? And what about entertainment, health and politics…? Without supplies and bunkering, ships would be idle… Ports and terminals as well as logistics completing the intermodalism sector were all duly represented… Chartering and contracting too; specialists in travel  which is of paramount importance for crew members and all members forming the international shipping cluster which is always on the move…

Networking to the fore…

All in all the entire maritime industry sectors were there in full force; far beyond Noah’s Ark… Ah! and all pleased as the maritime sector does overall better in comparison with other sectors of the world economy, despite the slump mentioned above – particularly for Greece, and despite political party animosity with the shipping industry…

Once again, the new generation was one of the biggest groups and for the first time the biggest; a sign that shipping attracts the interest of our off-spring! And what about women; including WISTA members too! As a woman, I feel more than content about our breakthrough in what was a man’s world – now you can understand and see the she sea factor, needless to say why a ship is called a she… moreover  I am also proud that my son is a naval architect and marine engineer! All these specialities and the products/services they offer must be communicated – and today’s IT shipping specialists were also well represented!

George C. Amarantides and his girlfriend Toni Ewen both studying at Loughborough University

After an intense networking at the Wellington & Harvest Suite drinks reception, a good warm up – a bit squeezed, but sometimes that’s the fun about networking, which was a good chance to see those that you might for sure miss later on, we were ushered to the Grand Ballroom for the Dinner.

Entering the Grand Ballroom you could hear the Woooow from the guests for the impressively decorated room with nearly 55 tables to accommodate the 600 plus HESGB faithful!  Shortly afterwards Dimitris Monioudis, the society president’s welcome**  address was more than food-for-thought. He covered a great number of issues including the expectations from the new Greek government, thanked the supporters, sponsors, raffles prize donations and those who placed advertisements in the commemorative brochure – which was the best ever produced – and welcomed the new friends  and supporters including for the first time Moore Stephens, Globecomm Maritime, Cape Diving and Silverstream. He was warmly applauded whilst calling the unexpected guest of the night to take the…

…podium, a great surprise for all present, the eminent astronomer Professor John Seiradakis to enlighten us on the Antikythera Mechanism, the unique ancient analogue computer designed to predict astronomical positions, eclipses and much more. AllAboutShipping from time to time has uploaded reports on this magnificent piece of science and we were delighted to listen to Prof Seiradakis’s account. Let us all contribute to further research on this instrument which makes us all very proud of our ancestors’ advanced knowledge in assisting and contributing to life’s organisation.

The commemorative HESGB Dinner and Dance brochure with front cover illustration and references in all pages, signifies the importance for furthering underwater archaeology with whatever this entails – ROVs et al! A great new division of maritime archaeology and underwater tourism is ante portas!

The president of HESGB delivering his speech

The dinner was great – a well selected menu to please all, nicely presented and served; good taste! Plentiful of drinks and…sweeteners were followed by traditional Greek dancing performed by the Lykeion ton Hellinidon (the Hellenic Lycee dancers of London) an exciting display, as they do every year; the crowds joining them on the stage; and what about their costumes denoting the Greek grandeur, particularly the costumes from the Cyclades!

Well done Michael Sfakianakis and the Odyssey Academy vision; a real help for the next generation of young people into the marine industry; excellent!

Barbara Sharon received deserved applause with her surprise act, a super vocal performance; indeed an outstanding artist reminding us of the good old days of how Greek night entertainment, involved sheer fun! Syrtaki and all the Greek dances where first performed in the Greek seaports and …spread to the ports of the world’s ports(just for the record)!

A view from the Grand Ballroom with one of Lloyd’s Register tables. Tom Boardley, its Marine Director sixth from the left…

DJ Avgoustinos Galissos contributed to the evening’s success, particularly reminding us of some great songs, dancing numbers of the 60s and 70s; well done. You can see from the pictures what happened; all on stage! TGIF err Saturday so we can have a relaxed late Sunday morning…keep on dancing!

The Raffle Draw* with excellent contributions from the donations as well as from the guests  purchasing tickets; needless to mention the gifts, both in products and events! Charity too had its day with an envelope on each table from the Sailors’ Society.

The Cape Diving International table (no.50) with Commodore (Rt.HCG) Costas Amarantides, director of the GSCC, his wife Tenia in the centre left, Mrs. Maria J. Kontogiannis, , Mrs. G. Anastassiou; Loucas J. Kontogiannis, the McKenzies and the Pineiras’ on the centre and right…

A group of teh Lykeion ton Hellinidon foklore dancers performing..

The president mentioned in his welcome message the newly designed commemorative brochure and indeed that was a great point as besides the news, info, advertising and other matters covered, it was more than a pleasant surprise to read in almost every page a milestone in the history of planet ocean, particularly as regards shipping, science and technology. These references made the big difference as if you analyse them , they prove the strides our shipping world has made far beyond the land achievements. A good point for IMarEST to reflect on, as indeed members do in their daily practice!

We hope to see you next year and we take the opportunity to thank all at HESGB for the invitation and honour to be featured in their brochure with last year’s reporting!

It is worth mentioning all 23 Prizes as well as the sponsors:

1)Majestic International Cruises offered once again a cruise for two onboard the C/S Ocean  Majesty during one of her fabulous 2015 European trips – the number one super prize.

2)Fujairah Marine Services & Trading offered  Spitbank Fort Break for two. An escape ..your own private island located between Portsmouth and the Isle of Wight for an incredible 24 hours.

And the lucky winner is…

9)Flight Experience’s …flight of fancy… An introductory Flight over Athens and the Saronic Gulf in a private 4-seater Cirrus SR22 aircraft.

10)A £200 worth of John Lewis Vouchers kindly donated by ISS Machinery Services!

13)Deceptionist’s interesting One on one private magic Glass

14)A 18kt yellow gold pendant with a diamond by Kassis donated by Marichem Marigases.

15)An Isle of Olive Luxury Hamper. Handcrafted oval natural wicker basket with a plethora of natural Greek delicacies and wine from Isle of Olive!

The Hephestus table with the Morleys on centre stage!

17)A Lucky Flower made of goldplated bronze, turquoise stone, leather and silk designed by Nikoletta Tsiamas donated by the Scandal Ring!

18)Sen Lighthouse in Singapore offered another prize from the Maison Assouline; gift voucher for a tour of its flagship store’s private collection.

19)Telemar’s free choice for £100 worth of Marks and Spencer’s gift vouchers.

20)A Lathwaites case of white wines from Marlink!

21)Chevron’s sweet as the oil prices… a Champagne and Chocolate box from Fortnum and Mason!

22)Gl could have been the catch… as Global Navigation Solutions offered an 18 year old single malt whisky; Glenliver!, and

Will wait to hear the comments and views from the lucky ones on the Cruises and Holidays Prizes! 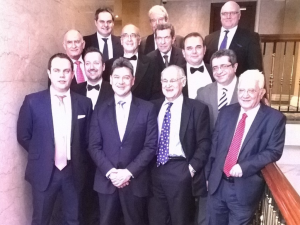 Members of the HESGB’s Governing Committee; the bright group; Agatha Cristie… knew well when she wrote the book “13 for luck”…

P.S. And when mentioned that this HESGB Anniversary event had a three year organisation process I mean it; the most important thing was making everybody happy to have that little bit of something. Starting with his and hers gift for all present, in every table one Cacharel white enamel elegant biro and Hempel’s realisation of 100 years, a special desk press papier compass. The HESGB bronze coin designed by Nikoletta Tsiamas for the society’s 20th Anniversary, more than thoughtful!