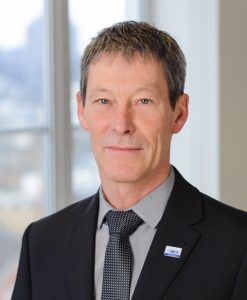 “With 17 years on a range of DP vessels under his belt, and as a long-time user of IMCA guidance, Andy is an ideal addition to our busy and highly qualified technical team working with our Technical Director, Jane Bugler, ” says IMCA’s Chief Executive, Chris Charman.

Andy’s career began with Texaco Overseas Tankship at 16. He completed a four-year cadetship, qualifying as a Third Mate, and during his ten years with the company obtained a class 2 Chief Mate certificate. He worked briefly ashore, but then applied to every company that owned or operated vessels working in the North Sea. After an interview with OIL he found himself onboard an anchor handling supply vessel in Great Yarmouth which, instead of working in the North Sea, set off for Angola.

He transferred to the Oil Endeavour, a very early DPDSV converted from a French fishing vessel and working in the Gulf of Mexico. They completed most jobs using 4-point moor, but nonetheless he learned many new skills onboard.

His next vessel was one of the newer DP vessels at the time, the ITM Installer. Time on a simulator course enabled him to qualify for the new system of DP Certification, gaining certificate number 127 (over 23, 000 have now been issued), and spent 17 years on various DP vessels both monohull and semisubmersible (including Semi 1, Semi 2 and Regalia) as a travelling senior DPO. He also captained Rockwater 1, Rockwater 2 and the Smit Pioneer working offshore in Asia, Africa, Europe and Canada. Six years ashore in the operations department of Smit International followed; and for the past six years he was with Maritime Progress, producers of marine industry training posters, manuals and safety signage.

IMCA AND DP
IMCA’s DP guidance including specific DP-related documents are available to download from the website at www.imca-int.com free of charge by members and non-members alike.

The association publishes a variety of guidance documents, setting out industry good practice based on the cumulative experience of our members to help ensure safe and efficient operations. A key document is the Guidelines for the design and operation of dynamically positioned vessels, which is regularly reviewed and updated to reflect technological developments and operational achievements.

Other documents address annual DP trials programmes (IMCA M 190 and IMCA M 191) for DP vessels, based on comprehensive and standard report formats for ease of use by vessel operators and their clients. IMCA also produce technical reports, aimed at helping vessel operators review, specify, maintain and use a variety of positioning systems, thrusters, power and vessel management systems and other equipment.

IMCA’s recording  of incidents on DP vessels extends back over more than 30 years and they strongly encourage participation by all DP vessel operating companies for mutual benefit.

Each year reports received are collated and an anonymised analysis of the incidents is published. This enables IMCA to help establish trends and common causes/potential hazards that can be addressed in discussion with vessel operators, equipment suppliers, training establishments and others, as well as in published guidance. The results have helped to keep the DP fleet operational, safe and acceptable to clients and regulators