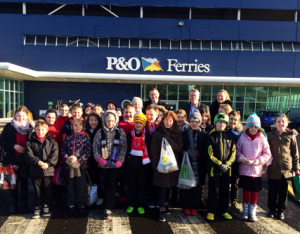 A group of schoolchildren spent the day learning about the economy, tourism and trade when they paid a visit to the Port of Hull recently. The visit was hosted by Associated British Ports (ABP) and P&O Ferries.

The group of 26 Year 5 pupils from Maybury Primary School in the city, made the trip to the port as part of Hull Children’s University’s Port Experience days. The days include a morning aboard a P&O cruise ferry learning all about the business that sees almost one million passengers take to the Humber each year.

In the afternoon the children climbed aboard a coach and toured the vast King George Dock where they found out about the importance of the ports industry to the regional and national economy, imports and exports and the wildlife that makes the Humber estuary its home.

Deputy Director of Hull Children’s University Natasha Banke has accompanied a number of school groups on the port experience days.

She said: “It seems a simple thing, but a visit to the port to find out about trade and where their phones, computers, clothes and even the electricity they use, comes from can really bring their learning to life.

“The children always love going aboard the ferries and they’re amazed at how big they are and how much there is on board. Even though we don’t actually sail, being able to get on board and have a look round is hugely enjoyable.

“These visits have an enormous impact on the children’s learning and are very beneficial, and best of all the port and the ferries are on their doorstep.”

ABP Sustainable Development Manager Tom Jeynes took the group on their tour of the port.

“It’s always enormously gratifying to take a group of young people with no preconceptions, around the port and see it through their eyes, ” said Tom. “It’s easy to forget what an amazing place the port is, and to share it with them is fantastic.

“We look at imports and exports and why the UK relies on its ports for all manner of goods and we talk about how this business creates jobs and income for the region and the country. We also have a look at how we help the animals and birds that live on the estuary and make sure they always have well-managed habitats.

“The children really seem to enjoy it and always ask some very intelligent and interesting questions.”

Andy said: “We host tours like this on a fairly regular basis and it’s always hugely enjoyable for us, as well as for the children. It’s fantastic to be able to show groups around the ferries and use them as a basis for learning and to help young people get the most out of their education.”