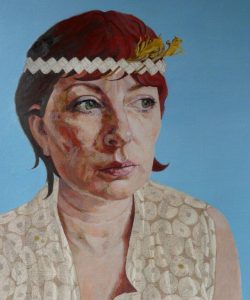 Artist Linda Ingham has, just outside her doorstep, access to material which is millions of years old. Small traces of jet have been washed onto the northeast Lincolnshire beach that is a few paces from her home studio.

The internationally acclaimed visual artist has been using jet to create highly original works for the last 10 years, exhibiting among other occasions at the London Art Fair 2015 stand of Abbey Walk Gallery, an enterprising arts centre based in Grimsby, where she is a curator, working alongside gallery founders Gill Hadwin and Elaine Munson.

She is fascinated by the mineral-like substance that has become an essential element in her artist’s toolkit because of its deep connections with the cycles of nature, the more so because “I am deeply interested in the passing of time and where we come from.”

Jet – the name is said to be derived from the Greek word gagates (one of its sources was the River Gaga in Lycia, modern-day Turkey) – is the result of high-pressure decomposition of monkey-puzzle trees dating back, according to some experts, 182m years. Such fossilised wood was prized by the Romans in Britain to make jewellery, and the Victorians had a fashion for jet gemstones.

Linda constantly experiments with drawing with what is in effect a fine version of coal, in which the molecules are much tighter. 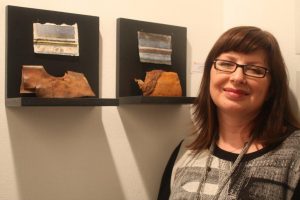 Linda Ingham with her works inspired by Lincolnshire seashore.

Jet drifted up notably at Whitby, the north Yorkshire resort and port of at the mouth of the River Esk. Less well known are the traces of jet on the banks of the River Humber, but to Linda they are a precious resource.

The seashore yields other inspirations for Linda’s practice, in the shape of “found objects” with origins in the maritime and heavy industrial history of the riverside. “Man has taken a natural material and turned it into something else, then discarded it and it ends up washed ashore on ‘my’ beach, having entered another phase of metamorphosis via nature, and which I will appropriate as part of my practice.”

She says: “Having lived in the area all my life and spent many hours staring out at the near horizon that is the north bank of the Humber, it seems appropriate that aspects of my work grow out of my relationship to this place and industry, as well as the ever-changing nature of the estuary.

“I attempt to use materials, process, and visual methods that in some way embody or acknowledge the passage of time, whilst at the same time trying to avoid the ‘time and tide’ cliché. Not all of my work is about this place, but most is to do with this movement through time, memory, and the human condition in some way.” This includes distinctive self-portraiture, often within the landscape. 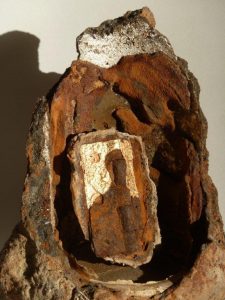 Reclamation 1 by Linda Ingham. Detail of work based on found objects (possibly a pipe from a ship, and a hinge) with 24 carat gold leaf, silver leaf and oils

Whether close by or far from the coast, Linda will, as has been the case for the past decade, enjoy a busy year artistically with several intensive projects on the go.  Following her success as one of the artists featured by Abbey Walk at the London Art Fair, the UK’s largest event for modern British and contemporary art, she will exhibit at Hull School of Art and Design from March 12 to April 20 2015 as part of a further stage of her project Behind Land: Excavations & Estuaries.

This stems from The Nature of Landscape, the project she began in 2009 to provide a platform for artists and academics whose primary interests are landscape and place. For Excavations & Estuaries artist Judith Tucker and poet Harriet Tarlo were commissioned to create work in response to a stretch of the Humber estuary between Humberston and Tetney.

That is the coastline along which Linda walks as often as possible, setting out from her Cleethorpes home to appreciate the flat landscape of white beaches, the salt flats at Tetney nature reserve, and the river itself for its history of commercial shipping.

Studies by Judith Tucker and Harriet Tarlo were exhibited at Abbey Walk Gallery in April 2013 along with ‘camera-less photography’ which uses only light-sensitive paper, by Susan Derges, (from the Arts Council Collection and in collaboration with Purdy Hicks Gallery of London), and work by David Ainley, David Walker Barker and Jeremy Leigh. Subsequently Judith Tucker and Harriet Tarlo were joined in the exhibition marking the culmination of the project by the landscape painter George Rowlett, who visited the area in 2013 (which he knows well, having attended Grimsby School of Art in the 1960s) – he also makes the most wonderful impasto paintings of the Thames, says Linda.

Examples of the resolved commission by Tucker and Tarlo, along with work by Ingham, Ainley and Barker make up the Hull exhibition, with the focus on the materiality of landscape and how it is modified through social, industrial and natural history. 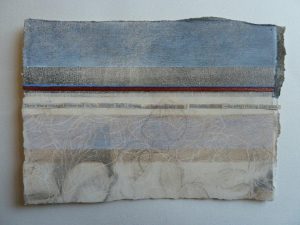 This and another of Linda’s curatorial projects,  Head & Whole, are platforms for shows and events “which explore the representational methodologies and research surrounding landscape and human form respectively.” Since 2009, both projects have achieved funding awards from Arts Council England.

Bringing the latest show to Hull School of Art and Design is a welcome step – the institution has been a highly regarded centre since 1861, and will assume even greater prominence as Hull shows its wares as UK City of Culture in 2017.

On another front, one of Linda’s pieces has just been selected for the Aesthetica Art prize 2015 long-list, and another has been acquired by a US museum, bringing this to two collected pieces in the US; there are several more pieces in public collections throughout Britain. One of her Easter Self Portraits is being used to publicise the new show at Rugby Art Gallery & Museum during March and April.

Born in Grimsby, Linda’s family has maritime connections – her father worked at Grimsby Docks for many years as an engineer making and servicing parts for many of the Ross fleet of trawlers (one of which featured in the Richard Curtis film The Boat That Rocked about a North Sea pirate radio boat in the 1960s).

Linda creates objects by various means, including collaged text derived from two 19th century novels she bought for £1 each in antique shops: The Wide, Wide, World written by Susan Warner under the pseudonym Elizabeth Wetherall (reputedly the first ‘bestseller’ by an American female writer), and White Wings by William Black – the books are coming-of-age moralistic tales of young women, and Linda rearranges the text within her work to inform the visual outcome, incorporating the aspect of weather.

Linda’s meticulous use of materials is underlined by her attraction to drawing with silverpoint, as the old masters had done. This involves inscribing gesso, which she makes herself with chalk whiting and pigment, with a silver wire. “I like my materials to be as raw as possible, ” she says.

Since 2008 Linda has created site-specific installations, such as Heavy & Light in Grimsby Minster, and more recently as part of the VS group who have worked together to install multi-media artworks in churches. In 2014 she was invited to join the 15 artists selected by Robert Priseman to create a piece for the Brentwood Stations of the Cross project, a series of paintings which will be exhibited in Brentwood Cathedral and the SE9 Container Gallery, London, before going on to form part of the permanent collection at the Komechak Art Gallery in Chicago. Incidentally, the SE9 Container Gallery is London’s first art gallery made from converted shipping containers, and it is located in the grounds of a school in Eltham.

Linda is known widely in arts circles especially in the north of England, for her own work, her enthusiasm as a curator, and her support for education.  She tours the country talking about her practice and encouraging undergraduates. Among her many commitments, she is a visiting lecturer in painting at Leeds University School of Design.

Shipping markets insight… The BDI down one at 512!