The “Zahra” seized in Crete

In the early hours of this morning the Hellenic Coast Guard / Harbour Corps of Greece in Crete,  following an air, sea and land combined operation directed by the regional Hellenic Coast Guard Center in Herakleion, in a very remote rocky place at the Gulf of Messaras, seized the Sao Tome flag vessel “Zahra”.

The authorities arrested the vessel with 3, 500 master cases of cigarettes, arrested the eight-member crew, two Greeks and six foreigners for evading tax laws and other offences. The operation was on for many days following a tip off and collection of information, during which an OPV Hellenic Coast Guard vessel whose crew occupied on the spot the ZAHRA, whilst the illegal activities where taking place. Special conveyor belts to discharge the illegal shipment, four lorry/tracks, generators and other equipment where seized. 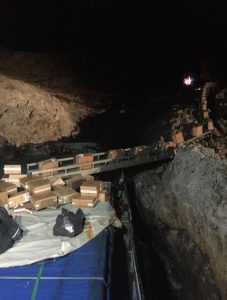 Sophisticated….state of art criminal activities during the cigarettes discharging “operation”…

The Alternate Minister for Economy, Infrastructure, Shipping and Tourism  Thodoris Dritsas, immediately congratulated the officers for the successful operation. The local police authorities also assisted in this operations.

Once again congrats to all!