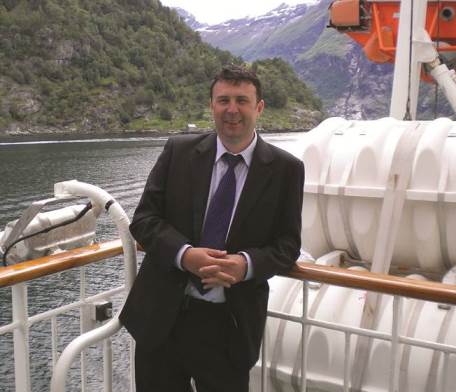 Image Line’s head of maritime PR, Patrik Wheater, has joined a growing list of shipping industry professionals to have signed up for the Sailors’ Society charity abseil event, which takes place in London this coming June.

Patrik, who briefly served in the Royal Navy prior to becoming a shipping journalist, said: “Having first-hand experience of what life at sea is like and having met so many seafarers during my career, I know what a remarkable job they do. The Sailors’ Society does an equally remarkable job providing non-denominational pastoral care to more than 345, 000 sailors, many of whom work in very difficult conditions and are away from their families for months on end.

“I haven’t abseiled since my early twenties when I served in the RN and from what I recall, I dropped like a stone, so there is an element of trepidation about jumping 540ft off the Broadgate Tower, one of London’s tallest tower blocks. But it’s time to man-up a bit and do something worthy for once.

“This is a really good cause and I hope that others will think: ‘Good Lord, if Wheater can do it, then I can too!’. There are still places left and the more we can donate, the more seafarers will benefit.”

The Sailors’ Society abseil will take place on Sunday 7th June in the City of London, after which a reception hosted by Reed Smith will take place to commemorate the achievements.

Patrik hopes to raise at least £500 for the Sailors’ Society and encourages the maritime community to show support for the invaluable work it does. Donations/sponsorship can be made via the Just Giving website: https://www.justgiving.com/Patrik-Wheater

Successful replacement of lifeboat systems on the Maersk Innovator