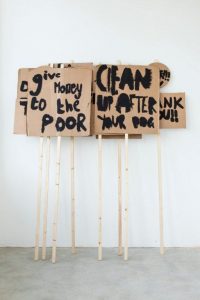 What are the three big rules you would introduce to improve life in a big city like London?

A group of children at an East London primary school are clear what they want:

•no bird poo
•no chucking food and drink, and
•more monkeys and rabbits.

These eminently sensible demands arise from growing up in a crowded and in part poor area of the capital.

Such pleas find voice through a new exhibition at Whitechapel Gallery, the leading contemporary art venue located just over a mile from the school via the busy Commercial Road. A fascinating insight into the minds and experiences of youngsters who have been going to school for less than three years is revealed in the two small galleries which the Whitechapel permanently dedicates to the output of local schools and communities. 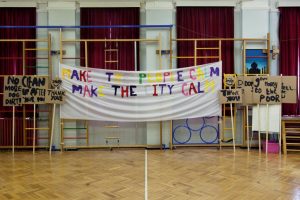 This is no juvenilia – it is a spectacle of photos, videos and hand-made banners motivated by Peter Liversidge, a highly regarded conceptual artist whose work combines performance and documentation. It is described as a solo exhibition, but it reflects the thoughtful contributions of 60 boys and girls aged eight and nine.

His brainchild to explore ideas around community demonstration and protest developed into a four month project, and is not over yet. In their uniforms topped with blue jerseys and cardigans, the children have already had a collective outing to the Whitechapel Gallery on May Day 2014 to have their ‘protests’ recorded on film, and they will go through the routine again at mid-day on May 1 2015. They have even performed their demonstration drama at the South Bank.

Peter Liversidge, who was born in Lincoln and is based in London, helped the pupils learn about how protest marches and public gatherings have changed society, albeit with limits.

The primary school children worked with the artist to compose and write lyrics for protest songs, create choreography and design banners and placards. They were quick to articulate their demands, as in the rhyming couplet, “Less trucks and cars – more chocolate bars!” 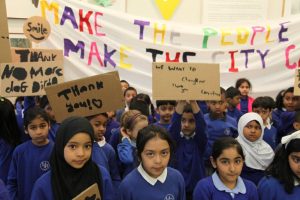 Students of Classes 3B and 3H at Marion Richardson Primary School, Tower Hamlets, had firm ideas of what needs to be done to make their lives and that of those around them, more civilised: their slogans held aloft on cardboard placards include: Our Shoes are too Tight. We are busting: More toilets! No more Dog Dirt. Their big banner declares: Make the People Calm. Make the City Calm.

There was a rally against having to do homework, and a plaintive call for a more palatable diet: I Don’t Like Cooked Tomatoes.

Head Teacher Ian Jones appears to have succeeded in the aims he outlines on the school’s website: “We are committed to offering an exciting and creative curriculum with a wealth of different experiences and opportunities to learn and flourish.”

The school is named after educator Marion Elaine Richardson (1892 –1946) who taught in state schools and prisons, putting her students at the centre of her day-to-day practice.

Peter Liversidge: Notes on Protesting has been supported by two philanthropic institutions which encourage the arts. One is the Stavros Niarchos Foundation, named after the late Stavros Spyros Niarchos who for many years owned the largest private shipping fleet in the world. Mr Niarchos, who passed away in 1996, was behind Hellenic Shipyards, at one time the leading facility of its kind in the Mediterranean, and which had a chequered history after being taken under state control in 1985.

The Notes on Protesting 2014 performances were commissioned by the Emdash Foundation, which was formed in 2010 by investor and businesswoman Andrea Dibelius, who is based in London and Munich.