Naming Ceremony for EVER LYRIC 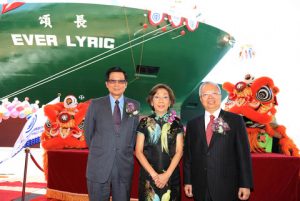 April 14, 2015 – Evergreen Group today held the naming ceremony for EVER LYRIC, theeighth of its L-type vessels built by CSBC Corporation in Taiwan. The ceremony took place at CSBC’s Kaohsiung shipyard and was officiated by Mr. Raymond Lin,  Evergreen Group’s Vice Group Chairman. The official rope-cutting of the new 8, 508 TEU vessel was performed by Mrs. Jarijanti Buana, the wife of the Chairman of Evergreen Shipping Agency Indonesia.

Owned by Evergreen Marine Corp.,  EVER LYRIC is 334.8 meters in length, 45.8 meters wide, with a draft of 14.2 meters.  The vessel can cruise at a speed up to 24.5 knots. As a refinement to her original eco-friendly design, the vessel is fitted with a brand new energy-saving bow. This improvement enables the ship to further enhance her fuel-efficiency and reduce emissions.   After delivery on the 15th April, the newbuilding will join Evergreen Line’s Far East-Red Sea Service (FRS), replacing an older vessel. 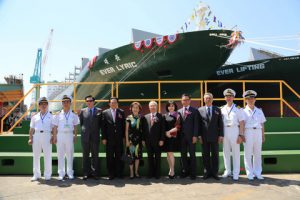 Mr. Lin said in his speech,  “Evergreen is devoted to sustainable development of the natural environment.  We have continued to monitor the operational data of our L-type vessels and have utilized this in joint efforts with CSBC to produce the brand new energy-saving bow design. Comparisons of such operational performance data reveal that this eco-friendly bow design enables a L-type vessel to reduce fuel consumption by between 12 and 21%, within normal sailing speeds. It does not only help to reduce operating costs but also safeguard the environment by cutting greenhouse gas emissions.”

In 2010 Evergreen Group commenced its current fleet renewal program, which in total includes thirty L-type vessels.  With the delivery of EVER LYRIC, Evergreen adds the 28th such ship to its operating fleet. The remaining two newbuildings are being built by CSBC and will be delivered by the third quarter of 2015.

The Migrants issue: the masks must fall….the Bautas must be dropped…