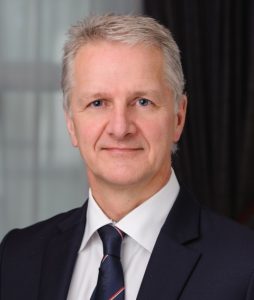 Institute of Marine Surveying (IIMS) chose the final day of Ocean Business at Southampton (16 April) to announce the eagerly awaited start date for the IIMS accredited vessel inspectors (AVIs) scheme, for CMID (Common Marine Inspection Document ) work on a worldwide basis as 1 June. Those wishing to apply to become IIMS AVIs will be able to register their interest from the beginning of May in order to allow for processing of applications from 1 June.

“The accreditation process for CMID vessel inspectors, to be known as accredited vessel inspectors or AVIs for short, will be explained on a new website devoted to the CMID AVI community, ” says Chris Baldwin IMCA’s Technical Adviser. “This initiative is being collaboratively delivered by IMCA and the IIMS and will radically alter the vessel inspection expectations of all stakeholders as the AVI badge will become the ‘industry standard’ symbol of quality for CMID reports.

“We wanted to announce the launch date where the industry was, for the evolution of the CMID has so much to do with us listening to the needs of the industry that we want to be able to answer questions on it at a public forum, and publicly thank so many who have helped steer us towards this important step in our efforts to continuously improve the CMID system.

“Now we have recognised the critical element of inspector competency and IMCA and IIMS will be working together to deliver CMID training and workshops for the benefit of the marine vessel inspector community.” Chris Baldwin added: “The changes to IMCA’s CMID itself in the shortly to be released version 9 are significant and extensive”.

“The new version is designed to be more useful than ever as an audit tool, and will see the return of the vessel supplements, which were withdrawn when version 7 was introduced in 2011. These 16 supplements will cover the common offshore vessel types, and are designed to be added to the general section of the document. The ability to add more photographs to the document will be included and we intend to ensure that the inappropriate generation of findings is reduced. We are planning to introduce the new version in July and will let the users get familiar with the new version before we commence the international workshop programme in September.”

IMCA will also be launching an App at the same time, which has been designed for Android and Apple devices, and links users directly to the eCMID database

The AVI scheme, being run and managed by MSA, a subsidiary of the accrediting body IIMS on behalf of IMCA, will be established on a worldwide basis with initial and refresher training courses being made available in all major regions where IMCA members operate. Having gained accredited status, vessel inspectors/auditors will be issued with an identify card embossed with both an IIMS logo and a declaration that the accreditation is recognised by IMCA. They will be able to get free download of the App and a comprehensive Vessel Inspectors’ manual.

Commenting on the launch of the AVI scheme, Mike Schwarz, IIMS Chief Executive Officer said: “We are thrilled to have been appointed to run the accreditation scheme for IMCA’s CMID Vessel Inspectors. The scheme is the result of more than 12 months discussion and careful planning with IMCA.

“It is an important and challenging piece of work that will resolve a clearly defined industry need. Furthermore,  it will put IIMS firmly at the heart of the international marine and maritime industry. We have already put in a great deal of effort behind the scenes and I look forward to our hard work bearing positive results for all involved as the scheme is unveiled and develops.”

The next step for those eager to become AVIs is to download an application from the IMCA CMID Vessel Inspector website and complete their application. IMCA’s partners at IIMS are keen to ensure that applications meet the criteria demanded and will be able to offer regional support hubs to provide applicants with advice and guidance on completing the application form.

CMID: the background
The Common Marine Inspection Document (CMID), published by IMCA, is a globally recognised vessel safety audit system that has done sterling work since 1999, meeting the aim of reducing the number of audits carried out on individual marine vessels by adoption of a standard format for inspection. It was joined in 2009 by the eCMID, along with a secure online database for the CMID reports, which are ‘living’ documents that can be kept and updated onboard a vessel.

In all nearly 2, 600 users (operators, clients and inspectors) have made use of the eCMID database, with 887 vessels on the system by 1 December 2014. “However, we know that on average only 10% of downloaded CMID report forms are then uploaded onto the eCMID database when completed, ” explains Chris Baldwin. “This data appears to support anecdotal evidence that the CMID user community is much broader than appears at first sight.”

Naturally, over the years CMID has been regularly reviewed and updated in the light of regulatory and technical developments. This year (2015) will see the release of version 9 reflecting that the current version, and the status of vessel inspectors, needed further revision to meet the demands of modern work practices and recent regulatory amendments in the maritime domain.

The revision re-emphasises the need to make the CMID an integral part of the process of the ship safety and environmental protection management system, which is a requirement of the International Safety Management (ISM) Code. This places legally binding responsibilities on companies, owners, contractors and vessel masters and crew for safety, and environmental protection management.

CMID is there to assess three measures of vessel assurance – the safety of personnel; the protection of the environment; and to visually inspect the internal integrity of the vessel’s hull (i.e. its watertight integrity).  The ownership by the Master and crew of the safety management system (SMS) cannot be stressed enough, and it is very apparent to vessel inspectors when the crew are properly engaged with the safety management system employed onboard. The inspector effectively acts as the Master’s independent observer with a responsibility to make an objective assessment of their vessel’s SMS, the top priority being to assure the safety of the Master and crew in the operation of the vessel.

The CMID applies to vessels 24m and over as well as the +500GRT, with the Marine Inspection Document for Small Workboats (MISW – IMCA M 189) applying to vessels less than 500GRT and 24m in length. The MISW has also been part of the review and will also employ the use of vessel supplements (though not as many as the CMID).

Further information on all aspects of the CMID and the inspection process is available from IMCA at www.imca-int.com and the IIMS at www.iims.org.uk