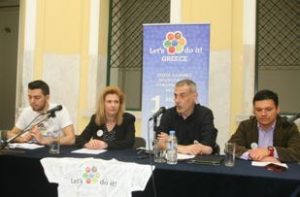 Greek volunteers support for the fourth consecutive time, the world cleanup campaign «Let’s do it World» www.letsdoitworld.org, a nonprofit campaign movement that first evolved in 2008 in Estonia and then spread internationally. It is currently the largest and fastest growing volunteer cleanup and environmental campaign internationally, with the participation of 112 countries and 11 million volunteers. People from every part of the globe participate in the campaign by cleaning on one particular day, their cities, their neighborhoods, parks, forests, beaches, conveying a message of activism for the protection of the natural and urban environment.

“Let’s do it Greece 2015” will take place this Sunday, April 26, 2015 and already 37.000 volunteers through 1.720 organizations and NGOs committed to join urban, coastal, forest and even underwater cleanups. Mrs. Yanna Pavlopoulou, member of the Main Steering Committee says “It requires a rigorous effort to promote the campaign in every corner of the country inspiring decentralized motivators that coordinate local volunteer actions. Organizers moto is ZERO BUDGET, ZERO PRINT, urging contributions in kind according to specific needs and dynamically sustain a spirit of self-organizing with transparency and pro bono. One can easily register at the official website of the campaign www.letsdoitgreece.organd join their initiative. Their main purpose is to launch in Greece, the effective result of cooperation among voluntary organizations, associations, schools, municipalities and businesses! Every day their site (www.letsdoitgreece.org) is enriched with new material and new entries. The Greek campaign is led by the scientific organization HSWMA (Hellenic Solid Waste Management Association) together with the youth volunteer society TIME FOR ACTION.

The Main Steering Committee coordinates the development and progress of the campaign and is responsible for: 1) the dissemination of ”Let’s Do It” message through social media and online communications 2) the close cooperation with the “Let’s Do It World” over relevant actions, 3) the design and development of the Strategic Plan of partnerships and activities 4) the establishment of “Let’s Do It Greece” as a permanent e-point on waste management and  main motivator for the self-organization of local community and group cleanup activities.

Their efforts have already the support of the Ministry of Environment (Department on Protected Areas, National Parks, and Marine Parks) of many Prefectures and municipalities, the Ministry of Education (that diffused their message to schools nationwide), the General Secretariat of Youth (informing all local youth councils across Greece) and more than 1700 entities, e.g. OLYMPIC CHAMPIONS, SUPER LEAGUE. The Mayor of Piraeus, Mr. Yannis Moralis, at a joint Press Conference with two of “Let’s do it” Organizers Mrs. Pavlopoulou and Mr. Kioussis, praised their initiative and signed the collective t-shirt that all significant participants sign to symbolize their commitment. Piraeus will strongly support “Let’s Do It Greece” initiative because it showcases not only the value of the authentic volunteerism, but also the positive and creative side of Greece! Cleanups will take place in many places across Piraeus, trying to raise awareness of environmental citizenship.