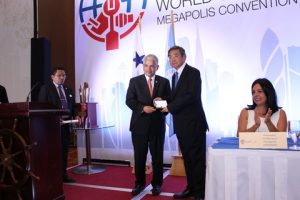 The biennial Panama Maritime World Conference & Exhibition for 2015, according to all accounts was a very successful one–and according to the organisers just about all objectives were met. This year’s  theme  was “Panama: Changing World Trade Dynamics –Leading Supply Chain Logistics in the Region” and in this context, more than 46 presentations by guest speakers from all over the world focused on the following six issues:

1. Impact of Canal Expansion in the development of the regional port system –with representatives of the seven major regional ports, including Mariel, Cuba and Port of Houston, USA;

2. The creation of value to the Canal route, with representatives from the four major shipping lines;

4. Legal issues associated with new ways of doing business, particularly logistics contracts; opening in Panama of the Centre for Conciliation, Mediation and Arbitration and creation of the International Arbitration School in Panama;

5. Impact on the industry in general –of new regulations to improve energy efficiency in shipping – Impact of fluctuations in the cost of oil in shipping; use of LNG in shipping and the implementation of regulations for Ballast Water Convention;

6. Institutional Strategic Plans: Execution Plans of the Ministry of Economics and Logistics and the Logistics Cabinet. The strategy of the Panama Maritime Authority to maintain its leadership in ship registry. Canal expansion update and new businesses associated with the Canal and its implementation strategy. 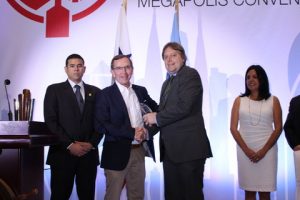 In terms of results, more than 46 local and international speakers participated. About 400 local and regional participants and 80 companies exhibited their products and services in the very well organised exhibition. The last day of the conference 102 local and international participants participated in technical visits to the Canal expansion project Observation Centre at the Atlantic terminal of Gatun; a visit to the Port of Manzanillo International Terminal, MIT in Colon and a visit to the Panama Ports Company, Balboa terminal in the Pacific. 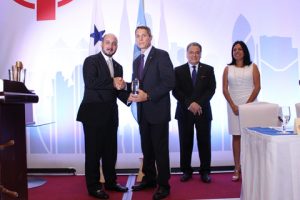 The Advisory Board provided ideas and guidance in the preparation of the programme –and some of them participated as moderators in the round table discussions: Philippe Embiricos, former President of BIMCO and Member of the Advisory Board of the Panama Canal Authority; Irene Rosberg, Master’s Degree Programme Director of Copenhagen Business School; Jorge Quijano, Administrator of the Panama Canal, Julio De La Lastra, President of Mitsui OSK Lines (MOL) Panama; Peter Hinchcliffe, Secretary General of International Chamber of Shipping (ICS) and Carlos Urriola, Vice President of Manzanillo International Terminal (MIT). The other Advisory Board Members are William O’Neil, Secretary-General Emeritus of the International Maritime Organization (IMO); Alberto Alemán Zubieta, former Administrator of the Panama Canal. The Secretary General of IMO, Koji Sekimizu, was also there to open the Conference and the Exhibition, receiving the Keys to the City of Panama from the Major of the City.

Captain Orlando Allard, Chairman of the Conference believes that many objectives were accomplished, particularly in the area of training, by promoting the participation of students, local and international  – and cadets from different maritime universities. The Organisers are very much aware of the Conference role in providing training opportunities for everyone in the maritime cluster through the discussion of important issues and topics by international experts.

Once again, the Organising Committee presented the Panama Maritime Awards. The awards include: Maritime Personality, Green Shipping, Maritime Social Responsibility, the Maritime Excellence Award – Excellence in Journalism is a new category that was added this year. This year, the President of MOL Panama, Julio De La Lastra, was conferred the covetted Maritime Personality Award for his many contributions to the local and international maritime, port and logistics industry, particularly to the training of young Panamanians. Michele Labrut, the America’s correspondent for SEATRADE Publications (UK), has been the first recipient of the Journalism Excellence Award for her more than 30 years in Panama, as an accomplished writer and reporter.

Captain Orlando Allard and overview of the main podium

The Social Responsibility Award is again awarded to Manzanillo International Terminal, MIT, for their labour policies and practices; commitment to the improvement of employees working conditions and the advancement of the community in general. Stacy Hatfield, General Manager, received the prize. The Green Shipping Award has been won by the Mar Viva Foundation and Dr. Juan Manuel Posada, Science Manager, received the award. Mediterranean Shipping Company, MSC, was selected for the highest award given by the Panama Maritime World Conference & Exhibition, the Panama Maritime Excellence Award and Mr. Peter Blohm, General Manager in Panamá was there to receive the prize.

Another view of the main panel

Two additional Honorary Prizes were also awarded to H.E. Wiebe de Boer, the Ambassador to Panama from the Kingdom of TPanama Maritime Awardshe Netherlands for his contributions to local industry and to the Conference. The Ambassador has become a very active member of the maritime communitiy in Panama and is very much respected and appreciated. The other Honorary Prize was awarded to Theodory “Ted” James, the highly respected editor and publisher of The Bulletin, a weekly newspaper specialising in maritime, port and logistics news for the last 30 years.